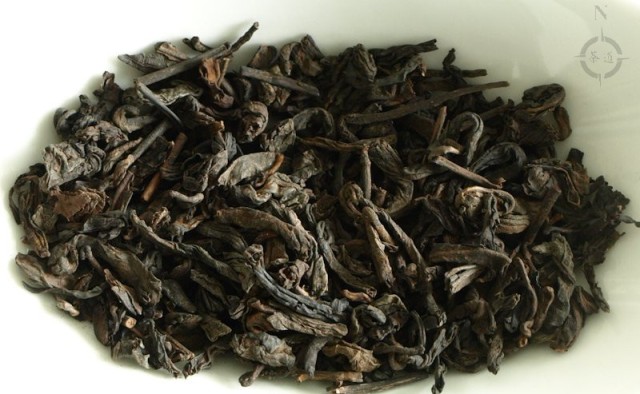 Let’s get the obvious out of the way before we go any further – this tea is never, ever, going to win any kind of award.

This is no pretty-boy tea comprised of leaves that look as though they were hand plucked by angels on a misty peak a stone’s throw from heaven and then painted by Rubens. There’s a lot of large, rough looking leaf material in there, and more than a few bits of stem, as well as the odd twig the size of a baseball bat.

It’s aroma will never have Chanel working on ways to capture that elusive scent, and then bottle it.

Dulux will never be inspired to create a hue named Shou Bronze after seeing the way that the fading rays of a Nordic sunset refract through this tea, and it is highly unlikely that poets will pen epic odes in its honour after supping it.

In fact, unless you search far and wide, this may be the only mention of it you ever come across, outside of, presumably, Chinese tea industry catalogues and suchlike.

Given the fact that it comes in a less than stylish ultra-practical 1kg weight sealed foil bag, my guess is that it’s intended destination is the catering industry, more specifically one of the Chinese restaurants located in the same neighbourhood as the supermarket I picked it up in.

There it will no doubt be utilised as a combined post-meal degreasant and digestif, something it is supremely good at.

After we have eaten our evening meal, and if I simply can’t be bothered taking my pick to a beeng, brick, or tuo, then these leaves are a fine substitution for one of the more refined shous in my stash. If we’ve eaten a heavily spiced meal, as we’re often inclined to do, then it would be a sin to partake of one of the better shous with sore and scorched mouths, but this tea won’t run into a corner and sulk when faced with the oral fallout from a Vindaloo.

This tea serves another important function. That 1 kg cargo lasts me about 6 months or so under normal usage, and so during that time I can be safe in the knowledge that I’ll always have reserves of shou to fall back on should I plan badly and burn through the good stuff without re-stocking in time.

It’s this tea that has been the foundation for the home-brewed, flavoured Frankenshous featured on this blog – chocolate, goji berry, and chrysanthemum.

I’ve also used it to do the donkey work when seasoning unglazed clay teapots that I’ve earmarked for shou usage. There you’re essentially simmering a pot in a large pan of tea, and that requires sacrificing a fair bit of leaf, so why put a better quality tea to the sword?

If you’re determined enough you can give it a little gong-fu love, but after much experimentation I’ve found that this tea works best when brewed up Western style – 4 heaped teaspoons, dumped in a 400 ml Ikea Upphetta French press with boiling water, and steeped for 4 minutes.

The result is surprisingly good. There are none of the funky, fishy tastes and smells you can easily run into if you score for a bad batch of shou, just a mellow, woody earthiness. Catch it just right, and you’ll draw out the beginnings of a vanilla sweetness with a hint of sour cherry.

Don’t purposely go looking for this tea – even if you managed to find it, it will never repay the effort involved in tracking it down. Instead, just be aware that if you should happen across it on your tea-travels then it’s worth a punt as an all round stash padder, emergency fall-back, pot seasoner, and base for diabolical experimentation.

Not great, this tea, but good enough, and sometimes that’s all that really matters…