Posted on December 7, 2016 by northernteaist 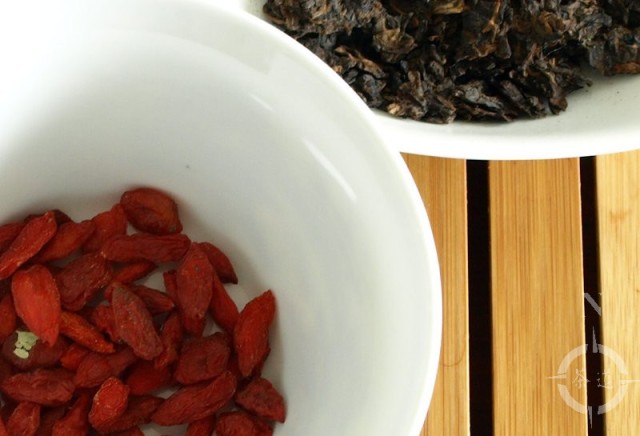 I happened across the idea behind this experiment when I was reading the Wikipedia Pu-erh page.

I’ve experimented with jacking the flavour of shou (cooked/ripe) Pu-erh before, using chrysanthemum flowers and mandarin peel, so thought I’d give it a shot.

Goji berries aka wolfberries are a bit trendy right now, having been the latest foodstuff to acquire the “super” tag thanks to being credited with a raft of as yet to be confirmed health benefits.

Goji berries are widely available in Sweden nowadays – the small packet of dried berries I used here was bought at our local ICA supermarket, and was sold under their in-house “Gott Liv” brand.

I had to experiment a fair bit to find the ideal ratio of tea to berries. Stray out of that zone and the result is that either the berry taste is simply not noticeable, or tongue curlingly bitter as well as overpoweringly sweet.

This, then, is what I found to work best for my taste.

Firstly, this technique seems to work best with a shou with an earthier, less complex flavour to start with. My best results came when I used the “Golden Sail” brand loose leaf shou that I usually pick up at a local Chinese supermarket in town.

When I tried this with other, slightly better quality shous, I found that their depth of flavour really clashed with the berries.

This makes me suspect that the technique was first invented as a way to give a little extra something to the flavour of shous that were considered to be lagging behind their tastier cousins somewhat.

I found that the tea really needed to be steeped Western style in order to give the berries time to give up their flavour to the tea liquor. 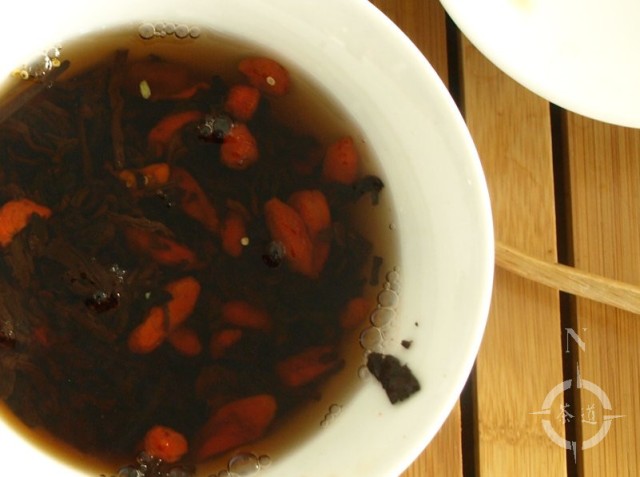 In my 600 ml Ikea Riklig teapot I used three heaped teaspoons of shou. I dropped the tea into a medium sized Cilia tea filter bag, together with 2 medium sized pinches of dried Goji berries, about 2 tablespoons in total.

Water was straight off a rolling boil, and the tea was steeped for 2 minutes duration.

The results were good. The berries gave the tea a pronounced sweet / sour flavour that really smoothed over the rough edges of the shou, but still allowed it to retain plenty of its signature earthiness and body.

I haven’t experimented with attempting a second infusion from the same berry/leaf combination, mainly because they are both as cheap as chips, and so it’s no big deal to use them and then lose them.

A successful outcome, then – a quick and easy way to radically improve the taste of a cheap and cheerful shou Pu-erh. Good stuff.