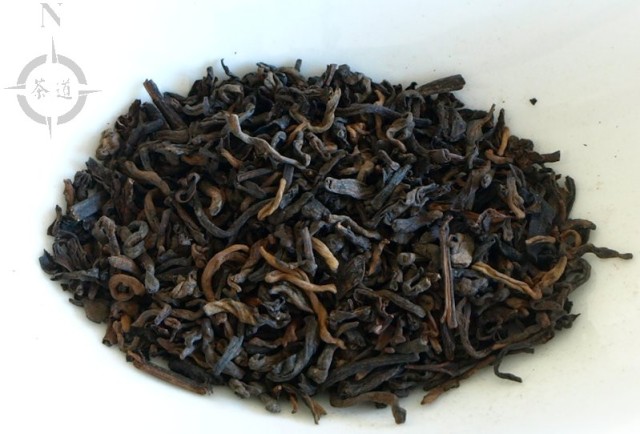 When you start to delve deeper into the mysterious world of Pu-erh, you tend to run across one name again and again – that of the Menghai Tea Factory.

They are without a doubt one of the major players in the market, and in the early 1970s, along with the Kunming Tea Factory, helped to develop the Wò Dūi wet piling process that produces shou (“ripe” or “cooked“) Pu-erh.

When I sat down in front of a computer to place my latest order from House of Tea it suddenly occurred to me that I had never sampled any of the tea the factory makes.

I thought it would be an interesting experiment to see how this tea weighed up against the slightly cheaper shou I usually drink as a post-dinner digestive beverage and palate cleanser.

It also should assist in diverting criticism from those who might say that my stash lacks a little class in the shou department!

A quick inspection suggested that there seemed to be a higher percentage of buds in the tea than in the cheaper shous.

The tea looked as though it contained none of the broken leaf and tea dust of its more affordable cousins.

The aroma of the dried leaf was also more subtle, muted even, without the in-yer-face earthiness of the other shous.

As per usual tea water was straight off a full-on boil. I dropped about 7g of leaf into our Samadoyo E-01 teapot.

I then did the customary quick rinse to flush out any dust and warm both the tea and the pot up. The rinse then warmed up and primed my teacup, and gave my tea-pet, Pee Pee Boy, sat waiting patiently on the tea boat, his share of the spoils. 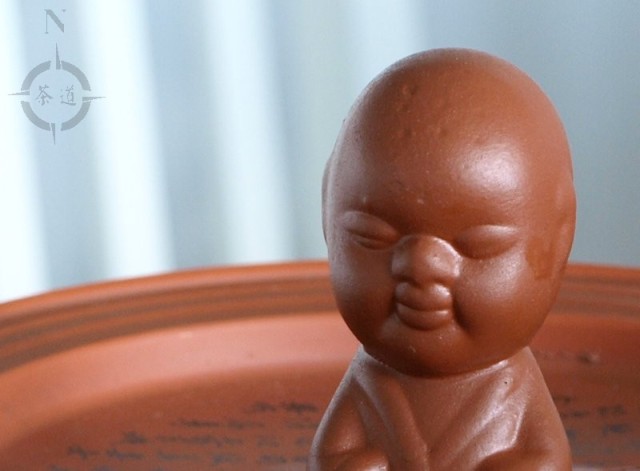 The Samadoyo pot comes into its own when performing flash infusions, and here I started out with a 15 second steeping, and bumped the subsequent infusions by 5 seconds every time.

The tea’s aroma was one of fresh, clean wet pine leaves and needles, rather than the more normal forest floor fragrances of my regular shou. As you might expect, there was a mushroom flavour there also, but it was subtle, and suggested freshly picked and straight out of the ground.

The usual shou umami was there in abundance, and had a tingly, peppery feel to it, almost akin to the málà sensation of Sichuan pepper on the palate.

The tea liquor had a very nice mouth feel to it, being full bodied but not overpoweringly so, leaving a nice refreshing, sweet aftertaste on the inside of the mouth and the back of the throat.

It also has to be said that this tea had the most interesting qi of any shou I’ve come across before, which manifested itself as a deep warming sensation – by the end of the session the sweat was really rolling off me! 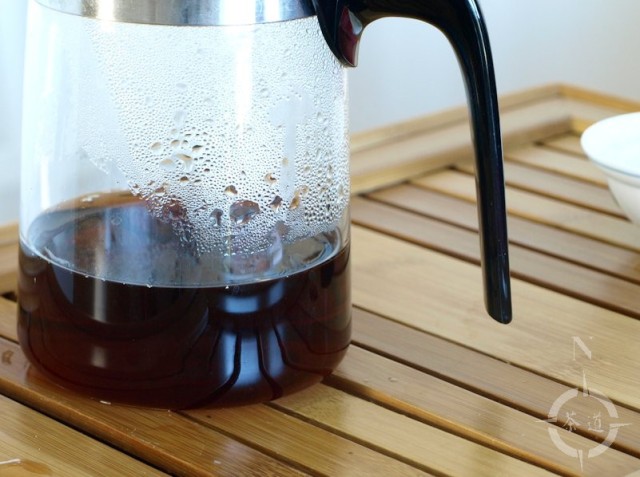 The early infusions were the expected beautiful deep mahogany colour, but after the 6th infusion the colour and the taste started to decline somewhat, so I upped the following steepings to 3, 5, and 7 minutes, which mostly restored the balance.

Even though the tea by now was starting to run out of steam, it had me beat. I think it might have been good for a few steepings more, but I had to call an end to the session at that point.

Interestingly enough, I drank the last steeping as I ate my lunch, which consisted of 2 burgers (sans buns, mais naturellement), along with a lot of raw onion, pepper, and good Dijon mustard.

This was, as you might expect, a rather good combination. In my experience shou Pu-erh makes a wonderful post-meal drink, especially when accompanying fatty meats. It was interesting to see that a shou of this quality was still robust enough to pull this feat off.

All in all a very good tea. It’s been good getting to know a shou made by the factory who started the ball rolling 40-odd years ago. 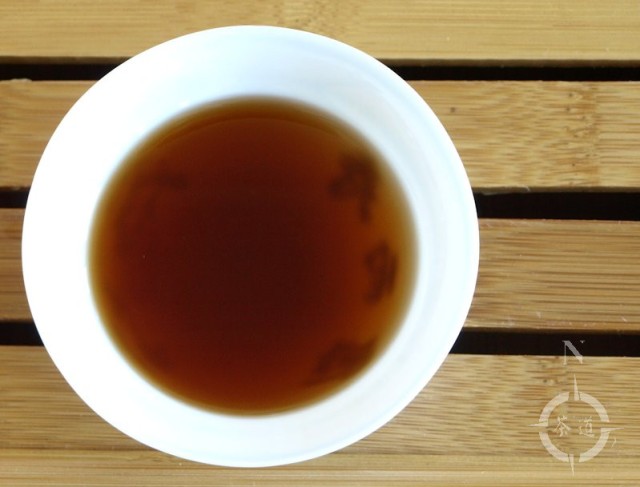