Posted on February 7, 2016 by northernteaist

To our Chinese friends “black (or dark) tea” means post-fermented teas, such as Pu-erh.

The ironic thing is that although black/red teas account for a mere 15% of China’s annual tea production, and that black/red tea is not widely consumed in China itself despite its huge popularity worldwide, Chinese black/red teas are up there amongst the finest teas of any type, and from anywhere on the planet!

Yunnan Gold is a variety of a sub-class of black/red teas known as Dian Hong – where Dian refers to the ancient name for Yunnan, with Hong meaning red.

I found this particular Yunnan Gold at one of the tea shops here in town, Five O’clock Te Handel, and paid 69 Swedish Crowns for a 100g packet.

The first thing you notice about the tea leaves is the relatively high number of pale coloured leaf buds that give the tea its “Gold” name.

The aroma of the dried leaf was very interesting. It smelled slightly of every tea shop you’ve ever been in, which is perhaps not surprising when you consider that lower grade, i.e. darker (non leaf tip), broken leaves from this type of tea are used in many blended teas.

There was also a hint of the almost sugary atmosphere of the inside of an old-fashioned sweet-shop.

I initially steeped the tea Asian style, using 6g of tea to the 150ml capacity of my gaiwan.

The water used was fresh off a rolling boil – 100°C. Scalding hot water is a wonderful test of your gaiwan technique, by the way. If you manage to prepare and serve a tasty cup without inflicting major burns on yourself or your guests then you’re on the right track!

Firstly, as with all red/black teas, Oolongs, and post-fermented teas (such as Pu-erh), I performed a short 5 second steeping (rinse) to remove any tea dust and begin the process of waking the leaves up.

The first infusion proper was 10 seconds in duration, with subsequent steepings increasing the duration by 5 seconds every time. 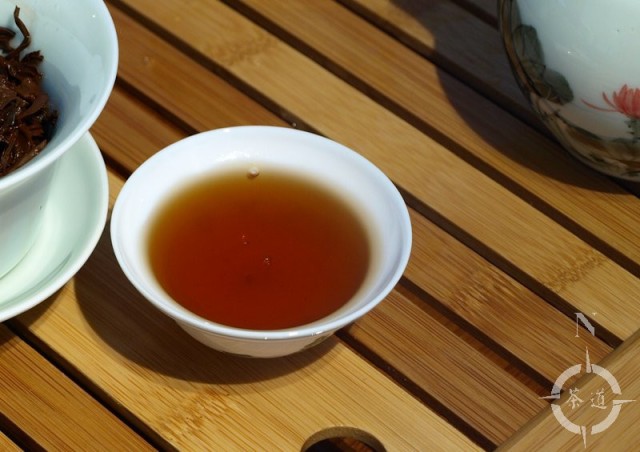 This tea was so delicious, so fantastic, that I just continued on and on with additional infusions. I think in the end I got as far as the eighth or possibly the ninth infusion before there was a noticeable drop off in taste.

This tea has a wonderfully robust flavour, with not the slightest trace of bitterness, and yet still manages to be subtle and quite sublime, with malty, honey tones and a surprising pepperiness to it. The feel in the mouth was full, almost syrupy.

I always like to try out teas Western style, too, with a larger steeping vessel, a lower tea to water ratio, and longer steeping times.

Going down this route, I placed 2 teaspoons of the tea into a large paper tea filter, which was then infused in a 400ml glazed teapot. Again, I used water at 100°C, and the first steeping was for 2 minutes, with a second one at 2½ minutes, and a third and final steeping at 3 minutes.

The longer steeping times didn’t result in any bitterness, and although still very good, tea from the Western style pot never quite managed to achieve the extraordinary “Wow!” factor the gaiwan steepings did. 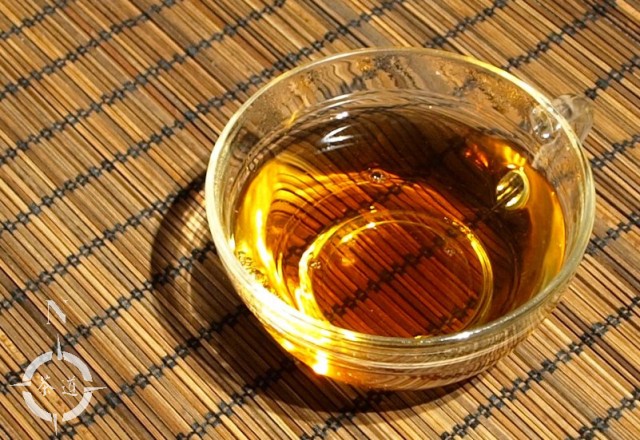 With its full bodied but subtle flavour, and based on things read elsewhere, I could imagine this tea working well alongside a nice piece of lean, red meat, as long as it wasn’t overly fussed around with, i.e. cooked simply and with no trick sauces covering it.

In their book “The Tea Enthusiast’s Handbook” Mary Lou & Robert J. Heiss proclaim that “Dian Hong in one form or another must be tasted at least once in a tea lifetime“, something I completely agree with!