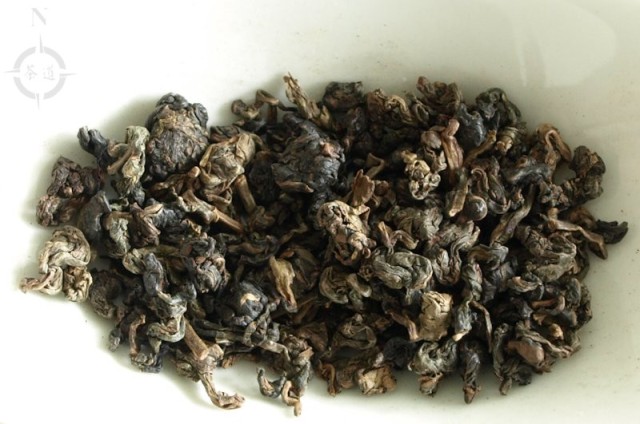 If you read enough blogs and hang out in the right on-line forums then you can’t help noticing certain trends in the tea world.

Not that long ago Huang Pian became a hot topic – at one point it seemed as though everyone was buying it, drinking it, discussing it, writing about it.

Right now it feels like aged Oolong is getting a fair bit of attention. I’ve previously toyed with a couple of small 3 gram samples of this type of leaf (see here and here for details), but given its current prominence on the scene I thought it might be high time I went from paddling in that particular pool to wading. 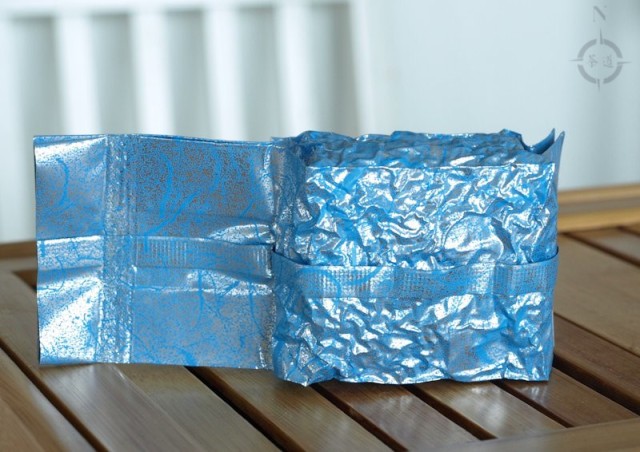 With that in mind, I checked out perennial favourites House of Tea, to see what they could tempt me with. Of the 3 aged Oolongs they had on offer I’d already sampled 2 of them (see above), so I opted for the one I’d never had previously, namely this 2001 vintage.

The raw material originates from Ming Jian township, which lies in Nantou county, Taiwan, and during processing was only lightly roasted. As I understand it, the majority of aged Oolongs tend to be more heavily roasted.

The 70 gram packet cost 199 Swedish crowns. The well-being of these leaves was taken very seriously – the packet was vacuum sealed, and for good measure contained an “O-Buster” oxygen absorber.

For a 17 year old tea the dry leaves looked remarkably clean, (something that was later confirmed by only a small amount of dust in the strainer at the end of the session), and so I decided not to perform a rinse. Those balls sure looked quite tightly rolled, though, so I went with an initial infusion of 15 seconds to really get them well on the way to opening up and releasing the good stuff.

Immediately after the first infusion I stuck my nose in the gaiwan to smell the wet leaves. Whoa!

They smelled of orchids, mahogany, and a maddeningly elusive dark spiciness, possibly cinnamon, maybe with a hint of cloves.

The initial impression of the liquor was that it was packing a deliciously creamy, buttery body right from the off, but that the true, full flavour of the tea hadn’t really appeared yet. The empty cup had a strong residual aroma in it, a sweet chalky mineral thing.

The floral notes arrived with a bang on the second steeping, along with something I can best describe as sweet lemonade, a sugar sweet citrus tang behind that floral front.

On the third infusion I felt a mild Qi hit, complete with a head sweat that never penetrated lower in the body than my Adam’s Apple.

One round later the leaves gave the impression that although they were going to give an awful lot they were going to do so over relatively few infusions. By the next steeping even my colourblind peepers could detect a lightening of the colour of the liquor. Attempting to head this off at the pass, I got busy with a bamboo spatula and gave the leaves a good stirring in the gaiwan.

I also bumped up the length of each new steeping to compensate, but by the 7th steeping the leaves had clearly given all they had to give.

I thought this was fair enough – I was happy with fewer steepings given the intensity of flavour that had been packed into each cupful, a real case of less being more.

I examined the used leaves. Even after all this time I’m still fascinated by the transformation a few grams of a ball Oolong undergoes during a session, that the same leaves that barely covered the bottom of the gaiwan at the start fill it to the brim come the end.

In total I’ll have 10 sessions with this tea, and I’m going to strictly ration them. This isn’t anything to do with the cost of the tea, more a case of me not wanting to get overly familiar with these leaves. Putting a few months distance between each session helps preserve some of that wow! factor you experience when encountering a tea you really get along with for the first time.

I’ve done it in the past – think Fujian Tulou, or Yu Chi Shan Cha. It’s a mixed bag of emotions. There’s the anticipation of the next session with the tea, the enjoyment of drinking it when the time comes, and the downside of knowing that the stash is now 1 session’s worth lighter, and that one day in the future you will inevitably place those leaves into a gaiwan for the last time…

That’s for the future, though. Right now I’m happy enough knowing I’ve still got 9 sessions in front of me.

A good tea, this. Glad I bought it.