I received this tea as a 3g sample along with my recent purchases from “House of Tea“, an amount which is usually acceptable for steeping gong-fu / Asian style in one of my 100ml capacity clay gaiwans.

It’s an aged Oolong, a 1993 vintage of the Da Ye cultivar, from Nantou County in Taiwan.

This was my first encounter with an aged Oolong, and I was keen to give it a whirl.

As I understand it, (and please do correct me if I’m wrong and you know better) the base technique after the usual Oolong initial processing involves careful storage in earthenware jars in a cool, dry environment, and periodical re-roasting to drive off any unwanted moisture.

The steeping water was at about 95°C. As I was dealing with both an Oolong as well as an aged tea, I gave the tea an initial 5 second rinse in order to remove as much tea dust as possible, as well as to begin the process of warming and opening up the leaf.

I started off with a 15 second infusion, and increased the length of each subsequent steeping by 5 seconds.

As with all ball Oolongs it takes a couple of infusions before the leaves have begun to unfurl properly and release good flavour into the gaiwan, but on the 3rd steeping things really started getting interesting.

The best way I can describe the flavour is as the smooth baked sweet biscuity taste of a dark Oolong, but with the wet leather and wood aspects of a good sheng Pu-erh coming around the sides.

I also got suggestions of a maddeningly hard to identify fruitiness that might have been grape or plum, as well as a fleeting floral note that came and went with the fourth infusion. 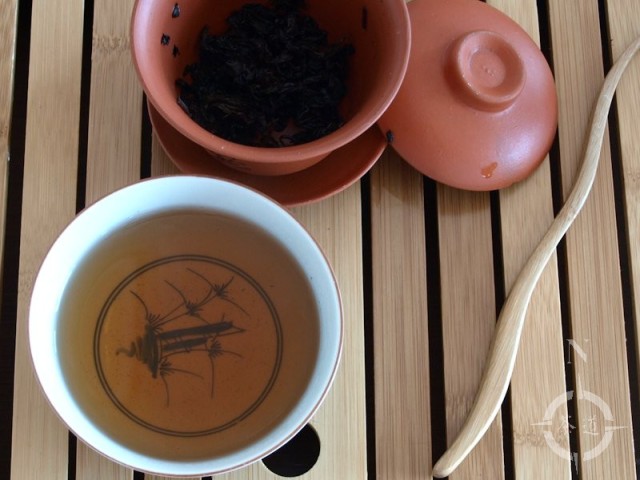 One thing that seemed to linger on the palate was what I can only describe as a “new book” kind of aroma.

Sometimes with a new tea you have one of those Lieutenant Columbo-esque “just one more thing” moments, when it dawns on you that things are not quite as straightforward as you think.

In this case I got the feeling that the tea was holding out on me somewhat, despite its obvious charms.

I’m not sure, but I got the feeling that maybe I could have squeezed more out of the tea if only I’d had a little more leaf in the gaiwan, or maybe if the water had been a bit hotter, and I’d steeped a few seconds more…

Apparently, it seems as though the market for this type of tea is becoming as silly as the Pu-erh scene once did. Prices for the good stuff are rocketing, and as a consequence fakes are being passed off as something they sadly are not. The best advice seems to be stick to buying from a dealer you know and trust, and if it looks too good to be true it probably ain’t what you hope it is.

When push comes to shove the pertinent question with a free sample has to be “but would you actually buy it in the future?”

I do have to say that yes, I do believe I would. I’d like to have another shot at steeping it just to make sure that I had a better understanding of how an aged Oolong sits in comparison with raw and ripe Pu-erh, or even a Fujian Tulou Laocha.

Speaking of aged teas, Liu Bao seems to be popping up on the old tea-radar more and more, and who am I to argue with the power of synchronici-tea?