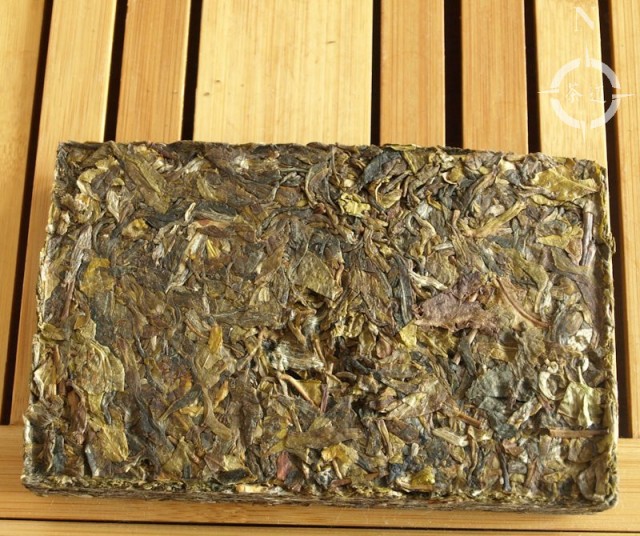 I came home from our Easter 2018 trip to England reinvigorated, tea-wise.

One of the first things I wanted to do once back was to bolster the sheng side of my stash. As winter had packed its bags and made ready for the off I’d kind of drifted back into drinking Bai Mu Dan first thing on a morning, but after working my way through back-to-back 100 gram loads I was in need of a change.

Sheng, I thought. How’s about a triumphant return to early morning sheng sessions?

This would be a potentially risky, nay, perilous even, move. Pre-noon sheng drinking is a coin toss – I either end up supercharged, running at approximately 450% of normal efficiency, or wander off into space-cadet territory, where I spend the hours between 8 and 2 lost in a strange land where the only sensible option is to sip the Yunnanese nectar and contemplate just exactly how many angels could dance on a gaiwan lid…

Rummaging through my sheng box I soon saw that the amount of tea that I would be prepared to chuck at super casual, early morning, “daily drinker” type consumption amounted to, well, not terribly much, actually. For starters I had the remainder of a Haiwan brick – that would buy me a few days time.

I jumped on tha interwebz, and tapped up perennial favourites House of Tea for 70 gram each of old faithfulls Ba Da and Bu Lang sheng, both from 2012. They would arrive the next day, and give me a good fortnight’s worth of wriggle room.

On a whim I decided it was about time that I paid another visit to Green Tea Guru, and this is one of the teas I found there and duly lobbed in my shopping cart.

The subject of Huang Pian is covered very well indeed in this blog post by Glen of Crimson Lotus fame, and as Oli says “…‘Huangpian’ is a leaf grade that is usually kept back and drunk by tea farmers. It is seen as unfit to add to most Raw tea blends but finds itself in the mix with some…”

The same can also be said for shou Pu-erh, too – White2Tea’s legendary “Brown Sugar” bricks contain a good slug of Huang Pian.

So, I’d enjoyed Huang Pian before in blended teas, and was curious to see what a whole brick of it and nothing but it would taste like.

First impressions – this brick is very light in colour, and very, very tightly pressed. The best technique I find in such cases is to stand the brick up on its edge, carefully force the pick into the centre of the other, uppermost edge, and lever off thin sheets of compressed leaf.

After the rinse the leaves had what you might call a sort of general pu-erh aroma, but accompanied by a surprisingly sweet almost floral note.

As I sipped the first infusion I found myself agreeing with Oli when he says that the tea can be considered to be “…similar to a Longjing…“. That lovely creamy, oily body and mouth-feel is home to a nice, biscuity, vegetal sweetness at first, with the expected sheng mushroom umami sensation coming soon afterwards, combined with a fizzing pepperiness at the back of the throat.

As I drained the last few drops from my teacup the Qi hit, like a cricket bat to the back of the noggin – a full-on mind/body transwarp overdrive job.

Oli had warned that this tea was “powerful with strong bitterness” – I certainly experienced plenty of the former and thankfully very little of the latter.

The second infusion saw the Pu-erh-iness of the tea starting to become more dominant, with a hint of smokiness appearing and that unmistakable old Plaster of Paris aroma left clinging to the inside of the cup.

A couple of steepings later and I’ve come down with a bad, bad case of the sheng giggles. The cat and the season’s first invading housefly are keeping their distance. I can only guess as to what Bill and Humphrey the tea-pets are thinking. They’re probably as tea-drunk as I am…

By the fifth round the two competing flavour profiles have flipped position – the broth starts out all sheng-like, but after swallowing it’s the “green tea” aspects that linger. By this time the Qi has developed into a thermostat wrecker, t-shirt drenching upper body sweat. For some reason or other Pu-erh often triggers musical memories, and this tea is no exception, and for the rest of the session I find myself humming Bowie’s “Let’s Dance” as well as “Old Brown Shoe” by the Beatles, or should that be “Old Brown Shou?”

After the 1½ minute mark I found that although I had to up the infusion times the leaves just kept rolling on, until once I’d reached the 5 minute mark they’d had enough, and given all they had to give. 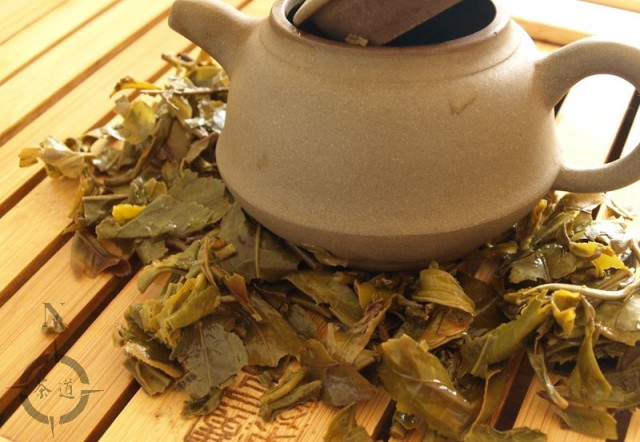 It’s not often I immediately want to re-order a tea on first drinking, but I did in this case. Unfortunately, Oli only had less than a full brick’s worth left in stock. Drat.

I’ll certainly be keeping tabs on the situation, and hopefully he’ll be able to get hold of some more, because this brick is really starting to carve out a niche for itself as a pre-and-post breakfast beverage…