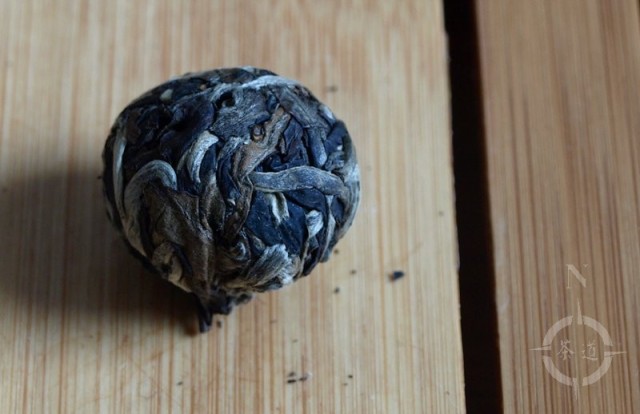 I ran across this wonderful nugget of deliciousness on my first visit to What-cha.

Seeing as I am i) rather partial to Dragon Balls regardless of the class of tea they are fashioned from, and ii) someone who enjoys a nice cup of Moonlight White on a regular basis, this was a stone-cold certain sale.

The raw material originates from Jingmai in Yunnan province, and is from 40 year old trees of the Zhong Xiao Ye Zhong varietal, which produces small to medium sized leaf.

The wet leaf after the rinses smelled of fresh hay and summer meadows, with the sweet malty notes of a hong cha layered on top.

Until the fourth infusion I was gently working on the ball between steepings with a bamboo spatula and my Pu-erh pick, teasing it open.

The first three infusions had plenty of flavour and a good mouth feel, full and creamy, but once the ball had fully opened up things naturally enough kicked up a notch. The liquor colour deepened, and the darker flavours became more assertive.

I think that Moonlight Whites feel like they are often a blend of a Bai Mudan and a hong cha in the flavour stakes, with the white tea’s softer, lighter, characteristics more noticeable early on, with the balance tipping in favour of the black/red side of the coin as a session progresses, and that was certainly the case here. The tea liquor was always sweet, starting off with that grassy, green apple sweetness, and morphing into a dark chocolate, malty, dried fruit sweetness as the session progressed.

The tea was almost completely without any astringent notes, but instead I picked up a kind of peppery quality that popped up on the 5th infusion and stayed until the end of the session.

If you were intending to initiate someone into the mysteries of gong-fu practice, then this would be a superb tea to do it with! Over the course of those many infusions they would get to see that pretty ball explode into a gaiwan full of luscious leaf, as well as see the tea liquor itself change colour and flavour profile as if by magic.

It also goes without saying that as with all Dragon Balls this will really do the business as a “travelling tea” – I’ve already pegged it as a candidate for Grandpa-style sessions on those long train journeys we regularly undertake to see family and friends further up North.

This is certainly a tea I’ll always want to have in from now on. A real little gem. Great stuff.