Posted on September 16, 2016 by northernteaist 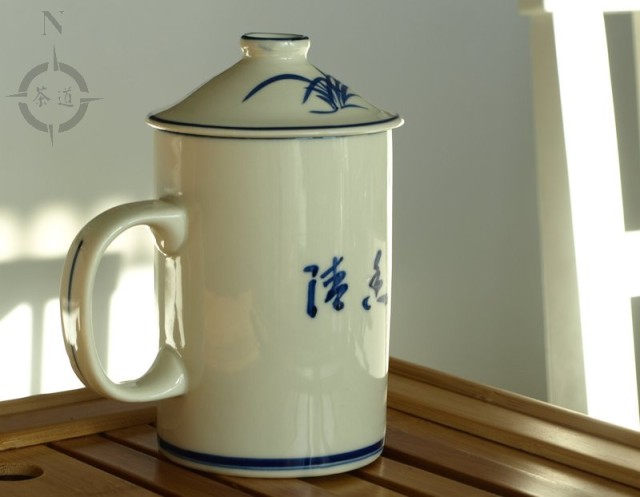 The lidded mug I use for Grandpa Style infusion…

If the gong-fu style of tea preparation, with its elaborate equipment, detailed methodology, and precise amounts and temperature control represents yin, then its yang can be thought of to be the “Grandpa style” method of steeping tea leaves.

The Grandpa style reduces tea infusion down to its absolute basics – tea leaves, hot water, and a receptacle to contain them.

As legendary tea blogger MarshalN (who is widely credited with coining the term “Grandpa style“) states, Grandpa style, or variations of it, are the preferred method of choice for a large percentage of tea drinkers in China.

It’s simplicity itself. In essence, Grandpa style involves nothing more complex than dropping a small amount of tea into your brewing vessel of choice and adding the hot water, and then periodically topping up the amount of liquid as and when required.

As many have found out, it’s a superb way to enjoy good teas when away from home – either when on the road or just at work – as long as you have your leaves you can always beg, steal, or borrow some sort of large cup, and unless you’re stranded in a post-apocalypse wilderness hot water shouldn’t present much of a problem.

It’s a method I often use when cooking. My mug sits next to my chopping board, within easy reach of the kettle for frequent top-ups. Just a teaspoon and a half of tea leaves will fuel a Grandpa style session that will last from the beginning of the initial prep until the moment I plate up.

I use a lidded Chinese mug for Grandpa style infusion. The lid helps to retain heat as well as aroma.

As far as the tea itself goes, you’re probably better off with good quality, whole leaf tea. 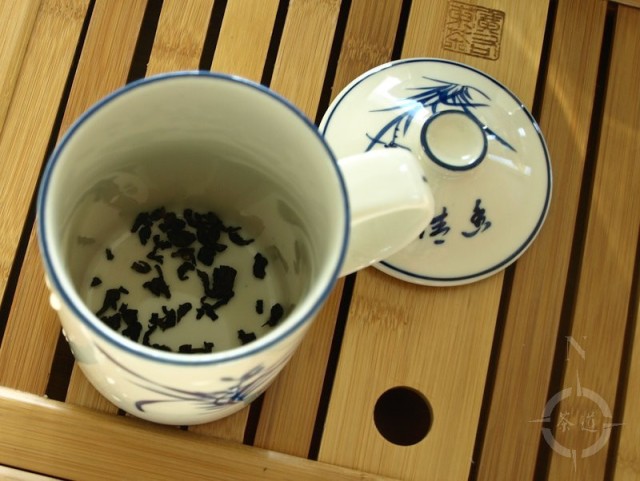 A teaspoon and a bit’s worth of tea leaves…

Not only will this minimise the risk of the tea becoming bitter over time, but it will mean less chance of swallowing small bits of broken leaf.

Oolongs seem to work particularly well Grandpa style, especially darker, more heavily roasted ones. Over the duration of a Grandpa style session they really get a chance to gradually open up and give their full amount of flavour. They also tend to sink to the bottom of the cup, too, greatly reducing the chance of a stray leaf ending up in your mouth.

As you can imagine, the technique is simplicity itself, but there are still a few things to take into consideration.

Don’t let the water level in your cup drop too much, as this tends to increase the probability of the tea becoming bitter. Aim for something like at least a half-full cup at all times.

When topping up the tea water, aim the water stream at the side of the cup, and pour from a fair height above the cup. 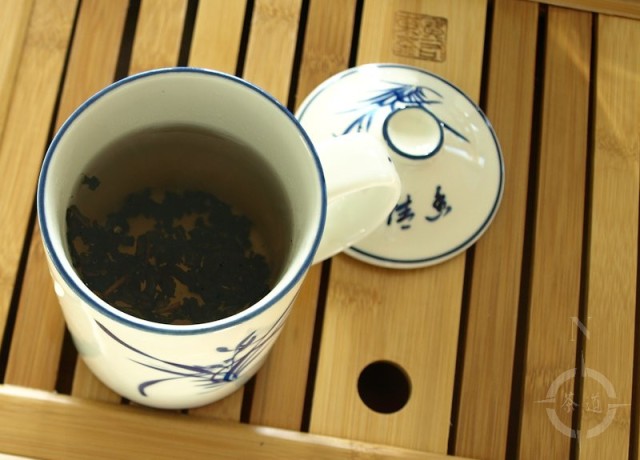 This will create a nice swirl, stirring the leaves and mixing the “old” brew with the fresh water, meaning that a little more flavour is coaxed out of the leaves, and the topped-up beverage should have a good, even flavour.

And that, mes amis, is all there is to it.