Those leaves are going to run out sooner or later, and when considering which tea should replace them in my early morning, pre-breakfast time slot I had to consider a few variables.

Firstly, to follow the current social distancing etiquette and minimize contact with other people, it’s probably best that all tea purchasing should be done online and delivered directly to our mailbox. This shouldn’t be too much of a problem – this is already the way in which the vast majority of my tea makes its way here.

As I’ve already mentioned previously, this does rule out further Bai Mu Dan purchases for the time being. This is a tea that takes up a considerable volume for a given weight, and that might mean a tea order arriving in a box too big to fit into our mailbox. That in turn would require a pick-up at our local supermarket, which is not exactly ideal at the moment.

I then started to think that if I was going to switch early morning teas then I might as well see how I get on these days with a black tea in this role. Browsing my favourite online shop‘s selection it suddenly dawned on me that I had never actually steeped two of the most widely known Chinese black teas, namely Keemun Congou and Keemun Mao Feng. This seemed like a good opportunity to put that right, so into my order they went.

House of Tea’s notes didn’t give much away. All I know for sure about this tea is that it’s Chinese, and that they describe it as “mild“, as well as good value for money.

I tend to opt for very easy and ultra casual Western style brewing in an early morning session, so I decided to play it more or less straight by House of Tea’s steeping suggestions, save for minor tweaks to water temperature and steeping times…

Before performing the first infusion, I gave the leaf a few seconds in the warmed up pot before removing the lid and taking a sniff. I picked up the combined aromas of milk chocolate, biscuits, and malt.

The first infusion was interesting – although I found House of Tea’s assertion that this was a mild tea to be fairly on the money, that didn’t mean that there wasn’t plenty of taste in the liquor – far from it.

In any case, the milk chocolate thing proved to be the most dominant taste, followed at a distance by the biscuits, with the malt note bringing up the rear. I also picked up a dark, fruity aftertaste that reminded me of raisins.

There was also a surprisingly chunky mouthfeel, which when taken together with all the liquor’s other characteristics made for a real moreish, uncomplicated, easy drinker.

This is a rather scruffy tea, hardly a shock considering the fine leaf. Plenty of dust and debris found its way into my tea strainer, and those small leaves had a tendency to end up everywhere, including all over the inside of the lid and even the outside of the pot.

The second steeping saw the liquor shift emphasis. This was now all about the maltiness, even the aftertaste. A touch of flinty hardness was now starting to creep around the edges, and I began to sweat like an overworked carthorse in a summer heatwave.

Looking at those small, quite delicate leaves I got to thinking that a third steeping might be pushing things a little too far, and so it proved to be. The third round was rather flat and more than a tad bitter, and I can honestly say that I swigged it down purely out of a sense of “waste not want not” bloodymindedness. 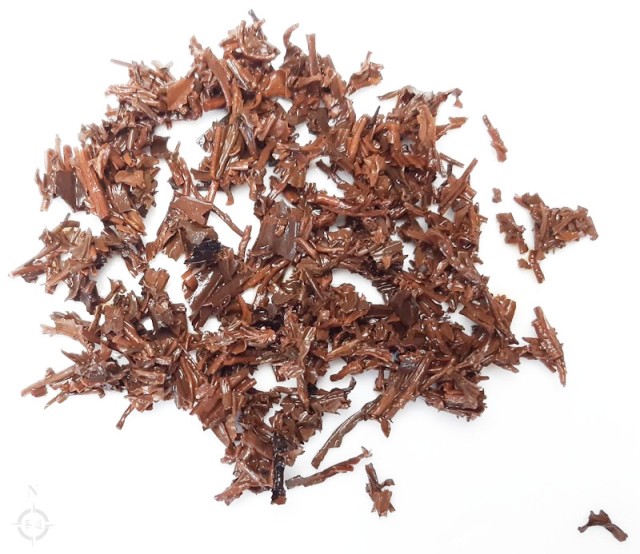 This is never going to be a “temple” tea, one of those you go to for a quiet, mindful, contemplative session, but what it is is a rock solid daily drinker. I can see it working really well as a breakfast tea – my gut feeling is that its laid back easy going taste profile shouldn’t clash with anything you would want to pair it with food wise.

For the sake of completeness I really ought to try gong-fu-ing it, if for no other reason than as a callback to its name and out of a sense of morbid curiosity. It’s more than likely though that in the future I’ll be sticking to single shot Western style brews in a 400 ml pot. At this price point you can afford not to worry about maximising yields.

Well, the Congou has put down a good marker in the brewmatch for the soon to be vacated wake-me-up-brew title, so now it’s up to the Mao Feng to show me what it can do.