Recently I was moving my teaware cupboard to make better use of our kitchen countertop real estate, and in doing so rediscovered an old pot that I’d kind of half forgotten.

I picked it up years ago at a local charity shop, because despite the fact that it had the word “caffé” emblazoned on its side, its size, 350 ml or thereabouts, made it a nice wee bit of kit for solo Western sessions.

Now, that particular boutique has one supremely annoying habit when it comes to teapots – in order to prevent lid and pot from ever parting company while they are in-store they tape the two together with yards of sticky stuff strong enough to secure an enraged rhino to the floor.

Consequently it was only when I got the pot home and peeped inside for the first time that I discovered that it had no kind of filtration between the inside of the pot and the base of the spout whatsoever. My guess is that it was intended to be used with teabags only.

I initially used it in conjunction with Cilia medium sized tea filter bags, but this setup never really allowed the tea leaves to circulate freely, because the shape of the pot didn’t suit these otherwise really useful bags. Over time the pot was used less and less until it finally slipped unnoticed to the back of the cupboard, hidden behind bigger and better pots.

Back in the present day I was putting together an order with House of Tea, and was clicking through their teaware section when I noticed a small “umbrella” type tea strainer. The general idea as far as I could see was that the thing lives in the far end of the teapot’s spout and prevents unwanted leaves from escaping from the pot and spoiling your brew. Apparently there was also a built-in bonus feature – it was supposedly good at preventing drips from the spout, too.

Straight away I wondered if this wee thing could make that old charity shop find a workable, useful pot, so into the cart it went. It was as cheap as chips, so was a shot-to-nothing, risk free purchase. 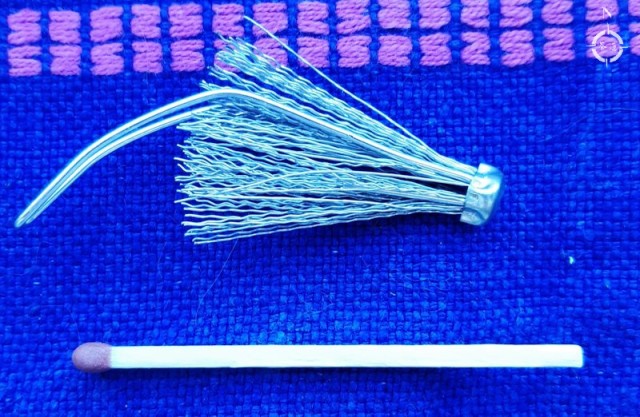 It arrived with the rest of the order the very next day. The strainer is made of food standard stainless steel, with the main body being 3.5 cm in length, and the “handle” part of it extending another 2.5 cm. See the picture above for a size comparison to an average household safety match. The Reon website says that with a bit of care the spread of the wires that make up the body of the strainer can be changed to accommodate different diameters of spout, and similarly the handle can be bent to shape as required. They also go on to remind you that you should be aware of the risk of puncture wounds from the ends of the wires, and appropriate care should be taken to ensure that children and pets don’t end up with the strainer in their mouths.

After giving it a good rinse off I put it straight to work.

I’d already cleaned up the old pot in preparation. I’d forgotten just how grubby it had been when it was mothballed, so gave it a good soak in hot water and denture cleaning tablets to loosen up the gunk. After a subsequent scrub and rinse off it was good to go. NB – all our teeth are our own – no porcelain gobs around here. Those cleaning tablets were bought specifically for the task! 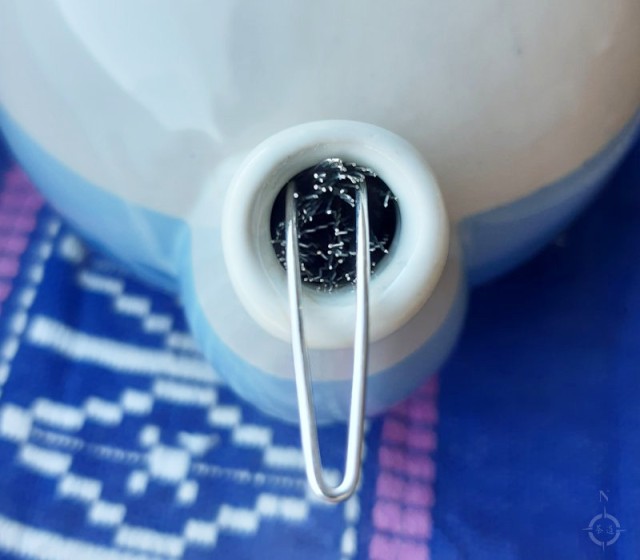 Anyway, I decided to give it a baptism of fire, opting to break the strainer in with a fine-leaf tea – Keemun Congou. The strainer was a nice, snug fit into the end of the spout. I warmed up the pot, and brewed the tea as per usual. Once the tea had steeped I decanted it into an Ikea Upphetta pot that I use as a gong dao bei.

As expected there was a slight reduction in the rate of the pour, but nothing that detrimentally affected it, and no leaves or leaf fragments made it past the strainer.

Even the drip stopper feature seemed to have worked well, too. This particular pot was prone to dribbling from the spout, as evidenced by the brown streak down the outside of the spout before it was cleaned, but during this session I noticed no tea liquor on that part of the pot during the pour.

Obviously it’s still early days yet, but so far I’m happy enough. It feels like I’ve got a nice new pot, and all for the sake of little more than loose change.