Posted on November 1, 2019 by northernteaist 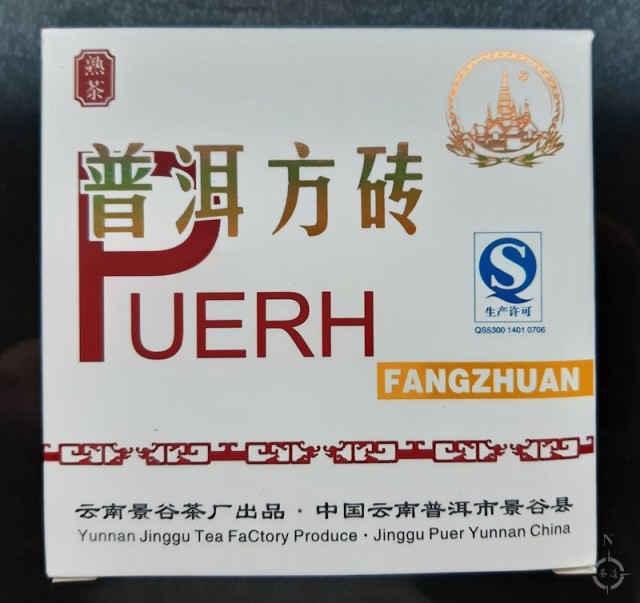 This is the fourth and final review of the shou Pu-erhs I recently bought from Danish teahouse Simply Tea.

The other three reviews can be found here, here, and here.

This 100 gram brick is a product of the Yunnan Jing Gu Tea Factory, and was pressed from Lin Cang area, grade 3/4 material.

I’m maybe wrong here, but I’m assuming that because this brick was pressed from better quality material, rather than the broken leaf and debris that some bricks and small tuo are put together from, the compression here wasn’t as severe as that on the cheaper stuff can be.

It was easy to get the business end of my Pu-erh pick in between the “channels” that separate the individual chunks, and “chain drill” one off.

I was then able to get the pick into the chunk from the short side, and further divide it into three individual sheets. This is a fiddly procedure even if you are confident in your abilities when it comes to combining small and sharp objects! There’s always the safe option, i.e. letting the chunk fall apart in the pot in its own good time.

The dry leaf was giving very little away aroma wise, but after the rinse it was singing a song about wood shavings and vanilla.

I made the first infusion a 20 second long one in order to tease apart the compression on the leaves. Right out of the gate the soup had a good colour and body with the promise of more to come. As expected with this type of brick a fair old bit of dust and particulate found its way into the tea strainer, something each round had in common with its predecessors throughout the session, albeit in ever decreasing amounts.

Before the second infusion I was able to undo the last bit of the compression by gently prodding away with a bamboo spatula, and so decided to fall back to a 10 second steeping time.

The broth now rolled out a creamy bordering on buttery mouthfeel, and the vanilla note had been joined by a sweet-but-sour cherry thing hovering in the background.

There was a wee surprise in store half way through the session. From out of nowhere a rose water like aftertaste appeared. It was like finding a hidden message in the run-out groove of an old vinyl record, or a carefully hidden Easter egg in a familiar piece of software.

During the next steeping the tea showed the first signs of slipping, meaning that I bumped up the infusion times for the subsequent rounds. Just a few rounds later, when all that remained of the flavours and aromas from those earlier steepings was a hint of rose and a tiny trace of vanilla, it was clear that the session was winding down, and after a 2 minute long 10th. infusion it was time to call it a day.

I have to admit that I was forced to experiment more than usual in order to find the best way to coax the most out of these leaves. Early attempts in a gaiwan were less than satisfactory, but things fell into place once I switched to a clay pot. At one point I played around with Western style brewing, and discovered that a chunk from this brick will quite happily take three infusions in a 400 ml clay pot, but without releasing the depth and range of flavours some gong-fu TLC will give.

I think this is one of those teas that really does need to be in a clay pot for the sake of those longer rounds that came later on in the session, when clay will hold the temperature better than a gaiwan, especially if you give it a couple of hot water showers during the steeping time.

Finally, I’ve got this tea pencilled in as a good potential “travelling” or “on-the-road” tea, either in whole brick form or broken down into its individual chunks prior to departure. A small form factor and plenty of taste means that it’s likely to be one of the first teas in my suitcase when I’m packing before future adventures.