Posted on October 14, 2019 by northernteaist

This 200 gram beeng is the second of four lots of shou that made up my late September order over at Danish teahouse Simply tea.

“Five Doors to Heaven” is the translation of the Mandarin name (五福临门) given in Simply Tea’s notes, and out of curiosity I ran it through Google Translate, which gave it as “Five Blessings“. It would be interesting to hear a Mandarin speaker’s take on this.

According to Simply Tea’s notes the creation of this beeng from the plucking of the raw material to storage of the finished product was under the supervision of a tea master named Mr. Huang. That raw material hails from from Wulian mountain, which lies in Jingdong county of Pu-erh prefecture. The leaves are described as old tree (gushu), and were grown at an elevation of between 2500 to 3300 meters. They were harvested in June of 2015. The plucking standard was 1 bud and 3 leaves.

The approximately 90 day long wo dui wet piling of the raw material was carried out by tea master Deng Rong at his Runhui factory located in Menghai.

Finally the beeng was pressed in November 2016 by the Zhongyi tea factory.

The rinse left next to no detritus in my tea strainer – this was on first appearances a very clean tea.

Right from the get-go this tea started delivering the good stuff. That beautifully coloured soup came with an equally luscious, thick, creamy body, which by the second steeping had morphed into a true sticky lips Orc blood job, that left oily tracks all over the teaware, and flowing henna tattoos on Humphrey and Bill, my teapets.

The broth was dominated by a paper and camphor top end, with a sour cherry, fruity thing in the background.

My tongue and the back of my throat were jabbed with a sort of peppery tingling sensation, and after swallowing the liquor every subsequent inhalation through the mouth felt like it was taking place on a dry, shockingly cold January morning.

By the third round I was experiencing a warm, dreamy Qi hit – as I’ve said before there’s not many shous that can affect me on that level. Perhaps it’s down to all that high elevation, gushu goodness.

One infusion later I picked up a blink and you’ll miss it sweet and delicate floral note that disappeared as suddenly as it had shown up. It was rather like being stood in a field beside a railway track, and waving to a passenger on an express train speeding past.

By the sixth steeping the leaves were starting to slip a bit, so I bumped up the infusion times accordingly, but after a three minute long 10th. round it was clear that I’d had the best of what the leaves had to offer, so I called a halt to proceedings at that point. 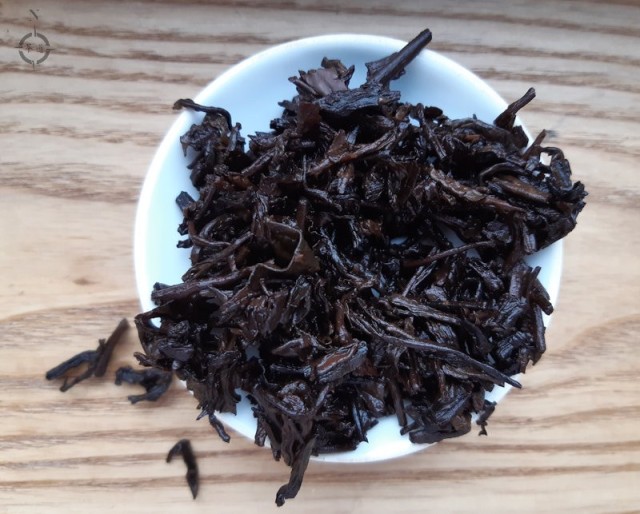 I think this tea would almost be wasted as a daily drinker, to be honest. It deserves a bit more of your time and attention. I’ll be giving it an hour or so on a quiet afternoon every now and then, when I can let the world condense down to me, the sea view, and these leaves. No snacks, no background music, just the clink and chime of porcelain, and the sound of water in motion.

I get the feeling that this beeng is going to be a good antidote to the upcoming cold, short, damp, dark days.

This entry was posted in review and tagged beeng cha, shou Pu-erh. Bookmark the permalink.

5 Responses to 2016 Five Doors to Heaven