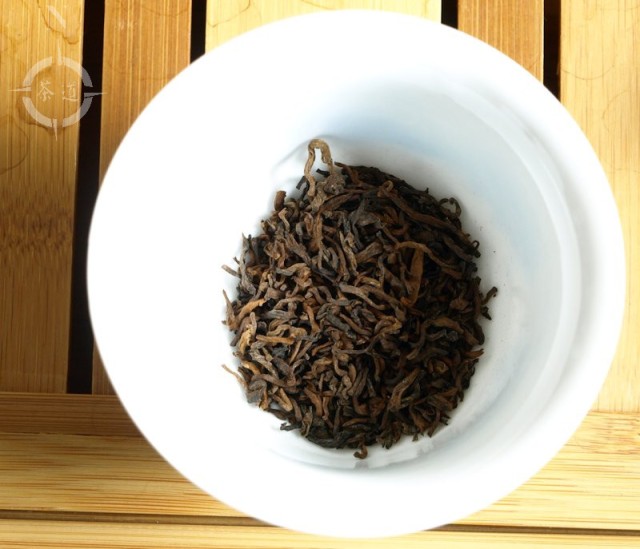 The other week Mrs. Teaist came home with a present for me, a 100 gram packet of Pu-erh that she had picked up on her way home from work.

She had spotted it in none other than Magasin Du Nord, Copenhagen’s premier department store, often referred to as the Danish capital’s Harrods. Their food and drink department has a rock-solid reputation for quality, so I was more than a tad curious as to what exactly she had found.

This tea is produced by a company called Danyun Fairtrade, as part of their “Tastes of Yunnan” T-Project. Not only are their teas organic, but they are also certified by the World Fair Trade Organization (WFTO). You can read all about the Fair Trade aspect of the operation, and what it has meant for the tea farmers, on the company website.

Given that the tea is named “Imperial Pu-erh“, and that the product description on the packaging references small leaves and buds, I’m assuming that this means that the raw material was Gong Ting or Imperial grade, i.e. the smallest, finest leaves used in shou Pu-erh production. Further information on the company website says that the material originates in Menglian County, which is in Pu-erh prefecture in Yunnan.

I was impressed that the packaging suggested rinsing the tea – this important aspect of tea preparation is often overlooked in the Western tradition – even though the suggested duration of the rinse at 30-45 seconds was far longer than I would ever use!

Instead of the packaging’s suggested Western brewing parameters, I went with gong-fu methodology, steeping 6 grams of leaf in a 150 ml gaiwan. After a quick (2 seconds!) rinse with boiling water, I started off with a 5 second infusion, bumping the time for subsequent steepings by 5 seconds a round.

Even on the first steeping the tea soup came up dark, creamy and full bodied, with a nice touch of vanilla and cherries. The typical shou earthiness was there, but it felt very “clean” somehow, light and fresh.

As the session progressed that already impressive body thickened still, turning into a true “sticky lips” job, and leaving dark, oily rivulets on the back of Humphrey, my Jin Chan tea pet.

By the 9th steeping the tea was showing signs of flagging, and just one infusion later it had faded down to the colour of a Hong Cha, and the session was over. Still, it had shown good legs for a fine leafed shou, and I was suitably impressed by the taste.

My curiosity piqued, I asked Mrs. Teaist to check and see what other teas from the Danyun range, if any, Magasin stocked. One tea purchasing session conducted over Facebook Messenger later a 100 gram packet of Yunnan Gold and a 60 gram packet of Moonlight White were added to my stash.

The Yunnan Gold actually seems to prefer Western style infusion  – 4 grams / 400ml @ 90 seconds works best, I’ve found. It has a nice malty flavour, and yet slightly more astringency than you might expect from a Hong Cha, but still significantly less than a typical “breakfast” blend, or an Assam. This makes it a very good choice for a breakfast tea – I can happily report that it works rather well with bacon and eggs!

The Moonlight White as you might expect is a very pretty tea, as well as being a very airy, light one. The 6 grams I used just squeezed into a 150 ml glass gong-fu pot when dry!

I followed the guidelines on the packaging and used water at 80°C, and coaxed out 13 enjoyable infusions.

The wet leaf had a flowery aroma, but there was also something pungent/spicy going on, something that reminded me of nutmeg, or cinnamon, maybe even white pepper.

The tea liquor had a very light colour, and a nice oily body. It was sweet, but not overly so like a silver needle can sometimes be. As the spring rolls in and the weather improves, I can see this tea getting a lot of action on warm, sunny afternoons.

In conclusion, then, I’m quite happy that Mrs. Teaist spotted these teas in Magasin. Not only are they thoroughly drinkable and enjoyable teas, but it’s nice to know that your money is helping to improve the lives of people back in Yunnan, too.