As I gazed forlornly into the two open tea caddies it dawned on me that I might have miscalculated somewhat.

I was stood in the kitchen at our summer house, and the caddies concerned contained my supplies of green gunpowder and loose leaf shou Pu-erh for the time we were going to be away from home taking in the Baltic sea air.

I had to take my tea with me for the simple reason that the nearest town to our house is, to be perfectly honest, a tea wasteland.

Before we left, I did some sums, and thought I’d come up with a reasonable amount of both types of tea to see me through. Two-thirds of the way into the break it now looked as though I would run out a few days before we were scheduled to return home.

Something would have to be done.

Then, that very afternoon, I’d cycled into town on a shopping expedition, and once in the supermarket I quite by chance spotted a packet of tea that had been stuck in the “World Food” section, rather than with the other tea.

The tea was a “Sevan” product. Sevan AB is a Swedish company that specialises in importing Middle-Eastern produce, and in this case they had sourced a Ceylon black tea, which is, as I understand it, very popular among tea drinkers in that part of the world.

The packet was about 500g in weight, which seemed like a good amount for a price tag of around 50 Swedish Crowns.

The leaf was described as an Orange Pekoe grade, which given the fact that all I could see through the packet was whole and not broken leaf seemed to make sense.

At that price it seemed worth a punt, and I really needed a third tea to help ensure that my stash wasn’t depleted to dangerously low levels. Take a chance on a new tea, or face the horror of supermarket own-brand budget breakfast blend teabags. No-brainer.

Not wanting to create either too weak or too bitter a brew, I decided to steep the tea hard and fast. 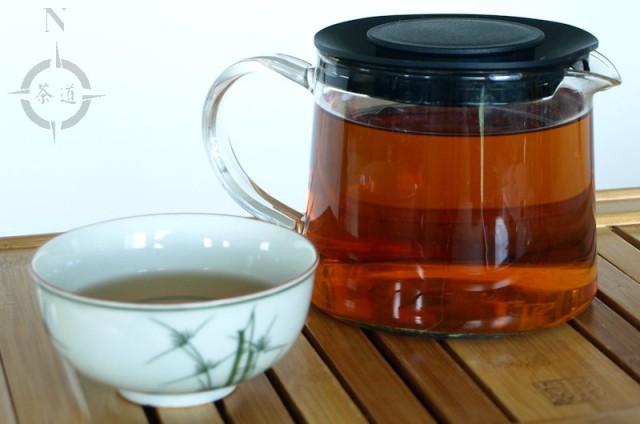 In practice this translated to three heaped teaspoons of leaf in a 500ml-ish sized pot, water fresh off a rolling boil, and after a bit of experimentation an infusion time of anywhere in the 1 minute 30 to 1 minute 45 seconds bracket.

This resulted in a cup with a nice flavour, good colour, and a refreshingly astringent kick to it. I have to admit that I was pleasantly surprised by how very drinkable this tea was.

The remainder of the holiday settled into a new rhythm tea-wise – pre-breakfast was green gunpowder steeped in the forest and drunk sat in a deck-chair on the cliff, a post evening meal pot of the Pu-erh, and the new tea filling in the space between the two.

I’ve been drinking it every day since returning home, and it hasn’t become boring as of yet, which is a good job really, because judging by the amount I have left I’ll be still drinking it come Christmas!