Posted on December 4, 2019 by northernteaist 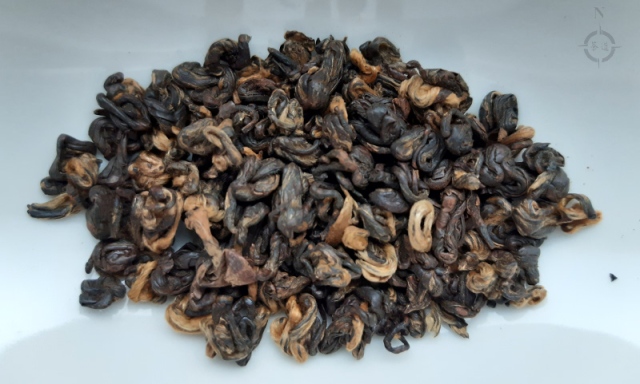 This is the first review of one of the teas that made up the double digit haul that Mrs. Teaist brought back from the German city of Lübeck recently.

This 6 gram sample was given to us when Mrs. Teaist bought 100 grams of Indian White Havukal at Tee Gschwinder.

When it comes to the question of background information, all I can say with any degree of certainty is that this tea is certified as organic, and that’s about it.

Seeing as this was a larger, 6 gram sample it got the full gong-fu treatment…

I started off with a 15 second infusion to get those tightly curled leaves opening up, which they did, and then dropped back to a 10 second steeping for the second round.

That first infusion was interesting. The background taste was quite similar to an Assam or a Ceylon black tea, but there was a subtle, sweet lychee thing layered on top. 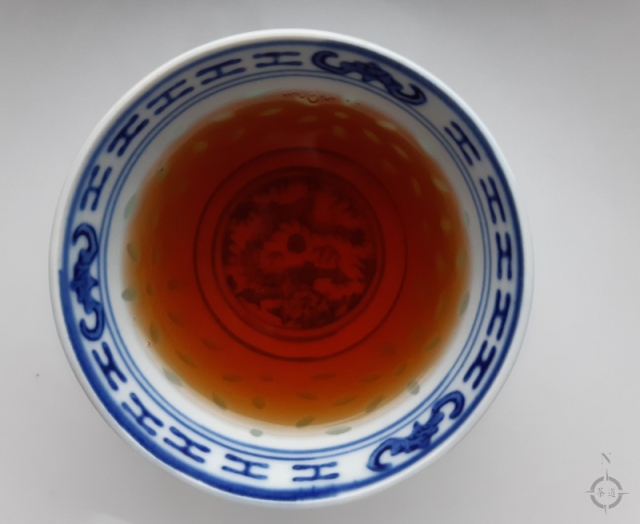 The body was also noticeably beefier, smoother, and less crisp than those other black teas, and although the sweet fruity note faded in intensity after the third infusion, it was still there in the background, just doing enough to make its presence known.

The fourth steeping saw the tea starting to slip a tad, and so I bumped up the infusion times accordingly. The tea rallied, and went on to give me another 5 good rounds, but that 5 minute long 9th. infusion was clearly the end of the session.

This is one of those teas that I almost want to file under “more questions than answers“.

As always, there has to be a fair bit of wiggle room involved when trying to come to meaningful conclusions about samples, even larger ones such as this.

For starters, it doesn’t help that I know so little about the origins of the tea, other than it’s certified as organic and the name suggests that it’s from Yunnan, as well as certain aspects of the pluck. Without much more than that to go on it kind of feels that your observations have no reference point. It’s a bit like the analogy of the blind man in a dark room hunting for a black cat that isn’t there.

I’m wondering if I might have misunderstood the German phrase “weiches kochendes Wasser” on the packet’s brewing advice sticker, which I took as meaning that the water should be just off the boil. I have the nagging doubt that it really means water at 90°C or thereabouts, which in turn would mean that I pushed the leaves a bit too hard. As I stated in my previous post, this tea does bear more than a passing resemblance to Yunnan Pure Bud Golden Snail, which I did indeed steep at 90°C, so maybe I would have discovered another side to the tea with slightly cooler water.

I also have the sneaking suspicion that this could be one of those teas that simply prefers Western style preparation over gong-fu, and that fewer, longer infusions and a lower leaf/water ratio might have worked better. 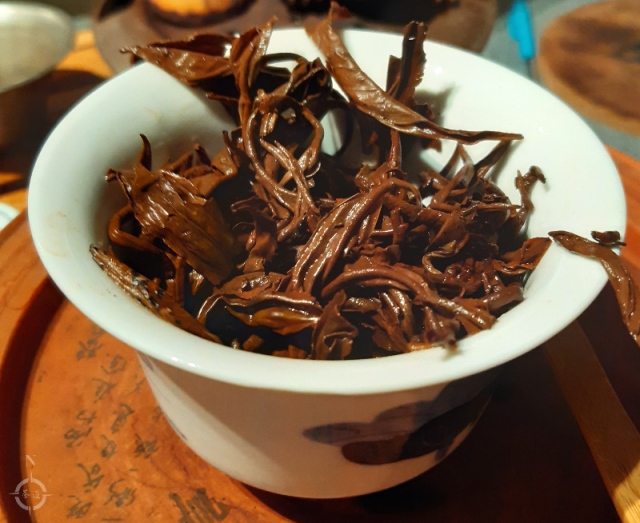 To sum up then – the overall effect here was one of taking an Assam or Ceylon black tea, ramping up the body, dialling down the bite, and giving it a sweet fruity flick at the back end.

This would work well as a breakfast accompaniment, or as a “just come back from shopping on a cold, dark, rainy afternoon” sort of a tea, if you see what I mean.

My thanks to Lucas Köllen who has clarified the meaning of the German phrase “weiches kochendes Wasser” for me.

Weiches refers to the mineral content of the water, i.e. that it should be soft, that is have a relatively low lime content, so the instructions are in fact asking that you use soft water just off the boil.

Lucas also agreed with me that water at 90°C might have suited these leaves somewhat better…!