Posted on January 15, 2019 by northernteaist 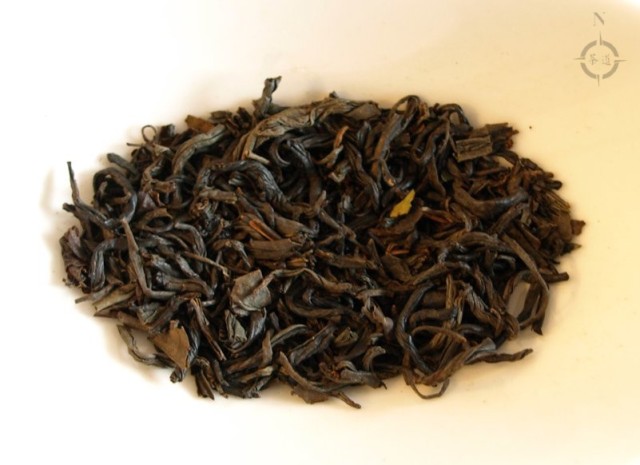 I bought these leaves from perennial favourites House of Tea with Christmas present cash.

At the same time I purchased what can be considered its “sister tea“, the soon to be blogged about Oolong Yabukita.

Both are Japanese teas manufactured from the Yabukita cultivar, which is normally used in the production of green teas.

This tea, the black tea of the pair, originates from Tenryū-ku ward of Hamamatsu city in Shizuoka Prefecture.

Apparently Japan had a flourishing black tea industry until 1955, when production was hit heavily by foreign competition. Black tea is still produced in Japan, but nowadays at a much lower level to supply the domestic market, with little being exported.

My experience with Japanese teas over the years has led me to the conclusion that unlike teas from other parts of the world it’s probably best to play it dead straight by any included brewing recommendations, which is precisely what I did in this case..

Smelling the dried leaves gave few hints as to what the upcoming session might bring, except something so subtle I wondered if I was merely imagining it.

Coming off the tea was the merest suggestion of what seemed to be the aroma of Japanese green teas, or to be more specific that clean, fresh, marine, sea vegetable thing.

It was barely there, like a whisper from the other end of a large, darkened room, and I initially wondered if it was my imagination playing tricks on me, fuelled by thoughts of the leaves’ background.

Once the pot was warmed, I dropped the leaves in and gave them a couple of seconds to acclimatize themselves. Following the brewing instructions I went with water at 90°C, a sensible option given the leaves delicate appearance, and the reputation of some Japanese teas as being quite sensitive to damage through excessive heat.

Even during the pour, the first 40 second infusion stood out. The liquor had a wonderful, oily appearance, and together with the beautiful luscious, translucent ruby red colour gave the tea an inviting “drink me NOW!” character. This was without a shadow of a doubt one of the prettiest tea liquors I have ever come across, and my photography doesn’t do it justice. To paraphrase Anthony Bourdain, maybe Cézanne might have wanted to have painted a cup of this tea, but might not have considered himself up to the job.

My suspicions about the body were confirmed once I took my first sip. This was a genuine lip-smacker, something you would never have suspected by merely eyeballing the dried leaf.

There was a lot going on in that cup taste-wise, too. As you might expect from a black/red tea there was a dark sweetness there, but in this case it was more of a burnt brown sugar/caramel kind of a thing, with the cultivar’s lineage making its presence known by throwing a handful of seaside into the mix.

Before starting the session proper I’d been a bit alarmed by the possibility of those typically green tea aspects simply not working in a black tea setting, like someone in full clown costume gatecrashing a formal dinner party at a fancy restaurant.

But work it did, acting as a kind of counterpoint to the sweetness, helping frame it somehow, like a shadow defining an edge, or a fleeting play of light highlighting a complex surface texture.

Other interesting characteristics of that first steeping was its utter lack of astringency, and its lingering aftertaste, all fruit flavoured candy.

The second infusion saw that change, with a slight hint of bitterness creep around the edge of that sweetness.

The third round saw that spectacular colour and all those other unique attributes start to slide, resulting in a liquor that was still very much drinkable, but now more in line with a Yunnan Gold or similar.

As is my habit, once a tea’s “Oomph” factor begins heading for the door I’m often inclined to call a halt to the proceedings right there and then, rather than risk spoiling the memory of an otherwise great little session by pushing on into uncharted territory. The brewing guide said that the leaves would be good for three infusions, so that seemed fair enough.

In conclusion then – this was a very interesting tea well worth getting to know. Regular readers of this blog might remember that I am always on the lookout for teas where leaves usually prepared one way are processed along the lines of a completely different style of tea altogether. If done well, as in this case, it can produce something quite different and very nice indeed.

I can’t wait to get to grips with the Oolong…