I came across this tea during one of my regular shopping expeditions over at House of Tea.

It’s a 100 gram chunk of a larger, hand pressed 500 gram beeng, which was produced by the Yong De Zi Yu tea factory.

The raw material is described as high altitude, high quality, hand plucked first flush, harvested in the spring of 2008.

The geographical origin of the leaves is Wu Jia village, which lies on the South-Western side of Yong De county in Lincang prefecture, close to the border with Myanmar.

Wild Arbor refers to former plantation bushes that have gone feral over the years, but as any puhead kno, this is a thorny issue. The best you can do is place your trust in a reputable dealer (and in turn their own suppliers).

The compression on the cake was light to medium, so it was a simple matter to tease off the amount needed. This was quite a “dusty” beeng-bit, it has to be said, and post-rinse and up until the fourth or fifth infusion I had to scrape a fair bit of tea detritus out of my tea strainer between rounds. 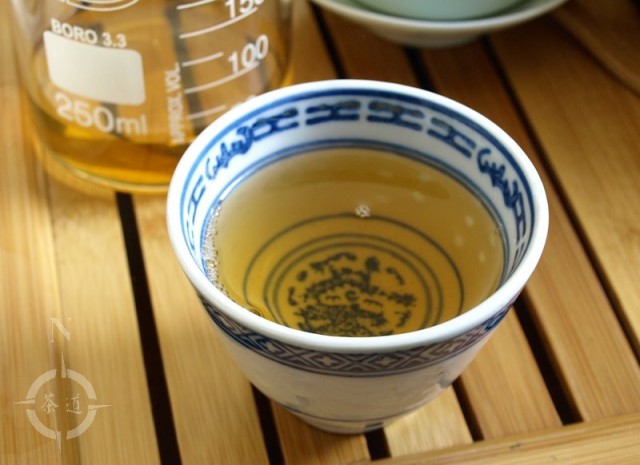 The tea soup had a nice, refreshing, astringent, woody slap to it, with leathery hints, as well as a light, subtle smokiness.

An interesting aroma, one that reminded me of hot egg shells, lingered in the cup.

The tea had a very nice oily, creamy mouthfeel, that I’d describe as almost silky. Even at the back end of the session, when the tea had started to tail off in terms of flavour and colour, the body was still there. This made me think that there was perhaps a little something left to draw out of the leaves.

I then remembered James from TeaDB’s video about the merits of changing infusion vessels during a session, and decided to give the leaves one final shot at glory by transferring them to my Ikea Upphetta French press and steeping them Western style.

This did indeed deliver a flavour Indian Summer, but that was clearly going to be that, so it was time to down tea-tools and start the clean-up.

An interesting tea, this, sans doute, but…

I can’t help thinking that this is one of those shengs that enter a kind of dormancy period taste wise between its green, slightly rough around the edges youth, and that mellow, mature era, and that these leaves are still in it, still slowly fermenting away, figuring out who they’re going to be when they grow up…

I think this one has to be filed under “put away and revisit in a few years time“. Having said that, let the record show that I have a hunch, a gut feeling if you will, that it’ll be worth the wait.