Posted on September 29, 2016 by northernteaist

Before I go any further, let it be noted that I recorded my tasting notes for this tea on the back of an old shopping list.

I then forgot to sprint to my workstation as soon as the session was over, and translate my scribblings into legible text.

At some point the piece of paper must have been flipped over, hiding my observations about taste and aroma behind a week-old reminder to buy toothpaste and bin bags, which is kind of ironic, really, as my quite detailed and nuanced musings ended up in said bin. By the time I’d noticed my notes were missing, they were smeared with leftover curry sauce, defiled by used cat litter, and en-route to the local incinerating plant.

This means, alas, that my description of this particular tea will be at best a bit vague.

I received this tea as a 3 gram sample along with the Anji Bai Cha I recently purchased from “House of Tea“.

Although that might not sound like much, it’s the perfect amount to steep gong-fu style in one of my small unglazed clay gaiwans.

This hand-plucked tea was harvested in the spring of 2016, and is of the Chin Shin cultivar. It grew in the Li Shan (Pear Mountain) region at an altitude of 2800 metres. That extreme altitude means slow growth, resulting in only two flushes a year, but it also gives the bushes plenty of time to accumulate all those nutrients that result in great tasting tea.

I used water at about 95°C, and performed a quick rinse. I opened up the session with a 20 second steeping to get those dragon’s eggs warmed up and hatching, and thereafter bumped up each infusion by 5 seconds a pop. 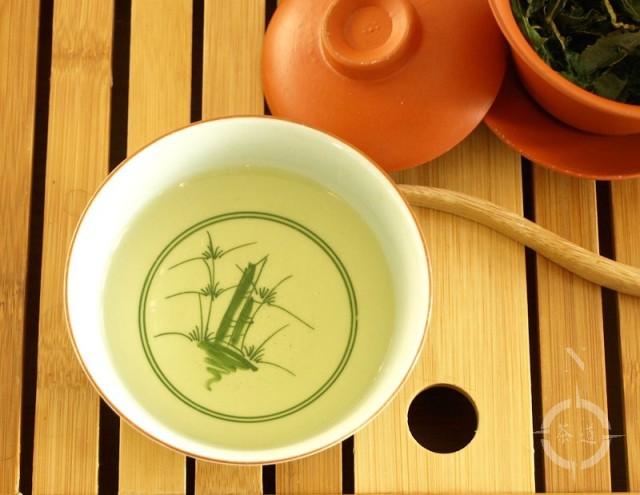 In all I manged to wring 8 steepings out of my sample.

Now, as regular readers of this blog might already know, this tea doesn’t exactly tick any of my boxes Oolong wise – I prefer more heavily roasted strip Oolongs from the mainland, but there was still something likeable about this tea. It had a sweet overtone that was maddeningly hard to pin down, and a nice floral finish that conjured up delicate scented flowers – unlike my dad I don’t have a gardener’s nose but if I had to swear on it I’d probably plump for rose, with a covering bet on orchid.

Maybe it’s my theanine fuelled imagination running riot, but every time I drink a tea grown at high altitudes I feel as though I can taste the thin air and the mist, and this tea was no exception.

Part of the magic with ball Oolongs is comparing those dry nuggets to the used leaves. It never fails to amaze me how large they truly are once they’ve had their chance to bathe and stretch, and with a lightly oxidised tea such as this, it’s also fascinating to observe how very green the leaves are.

When push comes to shove any discussion about a tea you receive as a free sample revolves around this question – would you throw cash at a full cargo’s worth?

Well, I can honestly say this tea did well enough to put it on my potential purchases list, rather than the must have one.

Still, seeing as I’m not exactly the world’s biggest fan of greenish Taiwanese ball Oolongs, that’s quite an achievement…