Posted on February 29, 2016 by northernteaist

Well, I’m back home again from my long weekend in Stockholm.

It’s nice to go away on a trip, especially when it’s to the bright lights of the Venice of the North, but it’s also just as nice to come home again. Home is where the gaiwans, variable temperature kettle, and tea stash is, that’s what I say.

After suffering the indignity of having to make green tea in a paper cup for the second time in three days, I was glad to be back amongst the porcelain. One of the first things I did was to unpack my new Blue Dragon motif Chinese cebei and cup set, give it a quick wash, and get the kettle on.

I celebrated a pleasant trip and safe return home with the aid of some Silver Needle, which I steeped in my favourite gaiwan.

I used the new vessel as a fairness cup, on a trial basis. I was hoping it would work out, as I’m coming round to the idea that lidded fairness cups are the way to go if you are making tea for one person.

If you’re making tea for several people then the tea will be served before it has a chance to cool down too much, or lose aroma to the air it is exposed to.

If you’re making the tea for you and yourself alone then that might not be the case. You could end up with cold tea that has lost a lot of its aroma, and that will simply not do!

Thankfully, it performed as well as I hoped it might, keeping the tea warm enough and fragrant. Mission accomplished! 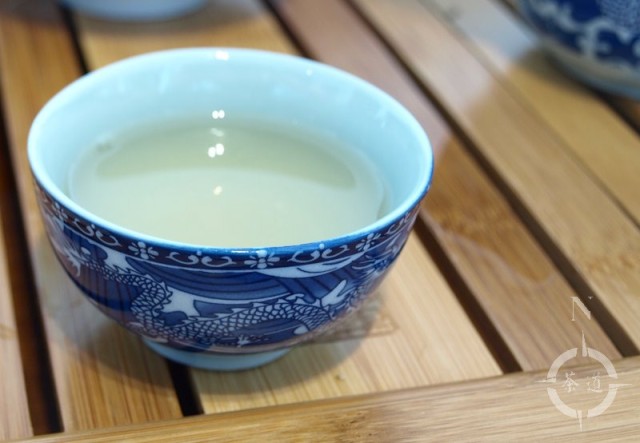 The cups had good heat retention characteristics, and felt comfortable both in the hand and up against the lips.

Nice teaware, and at a reasonable price too. File under “result!”