Of Mist And Melancholia

Posted on September 23, 2020 by northernteaist

For once it wasn’t the cat that woke me with his hunger driven protests, but the dull bass moan of a foghorn.

Out on our balcony it seems amplified by the mist, the booming lament of a sea-monster that appears to be simultaneously far out to sea, and yet also just out of reach in the pre-dawn gloom.

This ain’t Honahlee, but maybe there is a dragon frolicking out there in all that Autumn mist…

The low frequency reverberations of each bellow feel like a physical assault, an ominous, unsettling audible punch to the abdomen.

I go back indoors, and boot up my laptop. The Google doodle happily informs me that today is the first day of Autumn, as well as the Autumnal equinox.

That probably calls for some sort of celebration, I reason, and spend the remaining time before daybreak preparing for an outdoors tea session.

I drop about 6 grams or so of Keemun Mao Feng into a Cilia paper filter, and fill up my camping kettle, which is the prefect volume for the Ikea Upphetta French press I use for ultra-casual Western style infusion.

I place the kettle on my portable single ring butane burner, and fire it up.

I’ve recently reverted to using that heat source as opposed to my Trangia alcohol stove, something that I attribute to amongst other things watching Peter Gabriel’s video for “Solsbury Hill”, which includes a tea making scene featuring a kettle on a gas flame. My English teacher from the late 70s would have no doubt been amused by this, often complaining as he did about what he saw as the undue sway pop culture held over my life and work.

To be fair there is a practical aspect to the switch, too – now that the mornings are getting considerably cooler the alcohol stove takes longer to get going properly, so that bringing water to a boil takes almost twice as long as it did during the warmer summer months. The butane stove still manages to do the job in a little over five minutes.

The balcony is a bubble of clarity in a matt grey world, and even though, as First Aid Kit assure us, Northerners were born to endure this kind of weather I still feel cold enough to slip an old dressing gown over the top of my t-shirt and baggy woollen jumper. 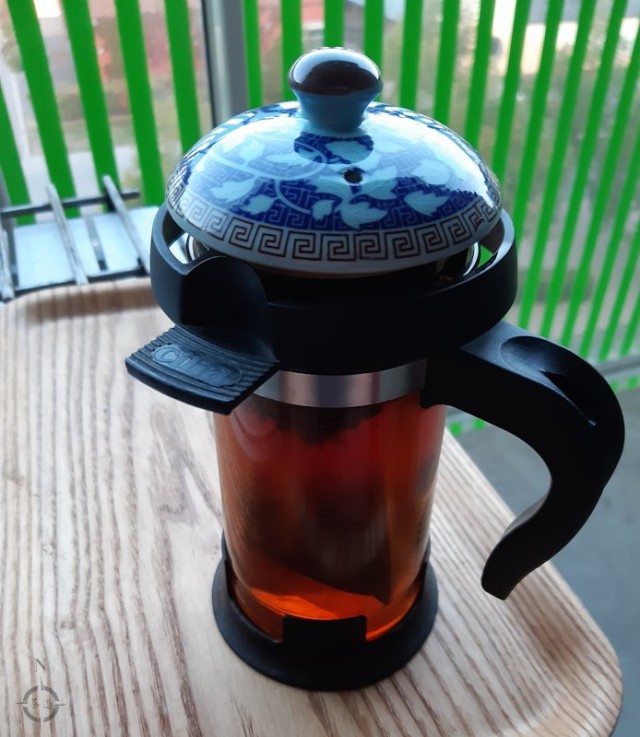 My water comes to a good rolling boil, and I warm up the pot, sit the filter bag containing the tea leaves in place, and fill it up with the hot water. 120 seconds later I fish the filter out of the pot, and decant the first cupful into a double-walled glass.

The back end of the year seems to have ambushed us, coming out of nowhere, the ultimate uninvited guest, like a loud drunk gatecrashing a genteel dinner party.

I ask Justin Hayward what he thinks. He mutters something about leaves and birds, before unexpectedly flying off, quietly weeping to himself.

I stand up, and loll against the balcony rail, cup in hand, appreciating the liquor’s beautiful ruby colour and inviting malty, chocolatey aroma, which seem doubly wonderful when contrasted against the washed out colours and faint bouquet of dying vegetation rolling in from the sea.

It suddenly occurs to me that from street level looking up that given the type of glass I am holding and the colour of its contents that I must look like some sort of dishevelled Bohemian type, taking the damp morning air with an early-bird double shot of whisky.

Over the road at the sports centre fitness fanatics at the gym are performing in front of the large windows, spinning, jogging, and rowing in place, all of them getting nowhere fast. 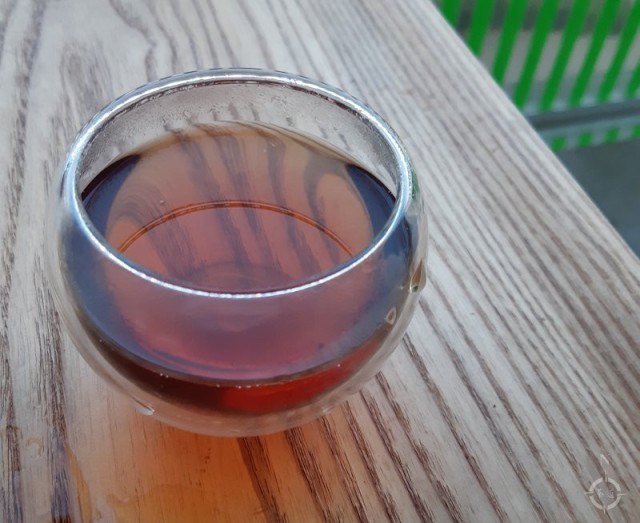 A couple of crows squabble over the flattened remains of a poor deceased bunny in the bus lane, no doubt the result of an unfortunate late night encounter with the underneath of the No. 3 into town.

Just then, an ice cold droplet of condensation falling from the balcony above ours hits me smack on the cheek. Another takes aim for my tea, but thankfully misses, exploding harmlessly on my wrist. Getting closer though….

I opt to stage a tactical retreat into the safety of the living room, and catch up with the day’s tea news as I polish off the rest of the pot. After breakfast it’ll be time to start on the day’s chores.

As I finish my final piece of toast the last few wisps of fog are slipping away, chased off by Sol, who is already casting flame red reflections back at me from the windows of tall buildings in Denmark, 30 clicks away over the water…