Posted on October 10, 2018 by northernteaist 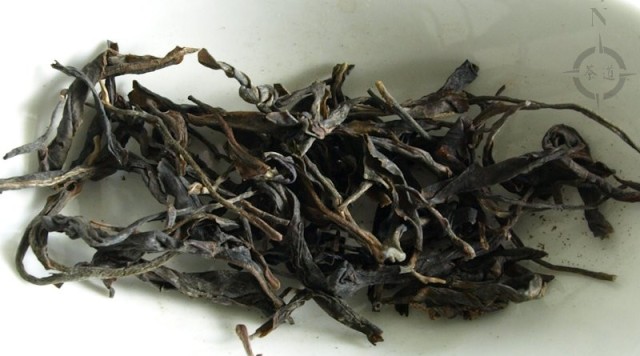 This was another tea I spotted over at Green Tea Guru.

These leaves originate from Gao Shan village, which lies close to Yiwu town, Mengla County, Xishuangbanna prefecture, Yunnan province. They were harvested from Da Shu or “big trees” – basically tea plants left to grow – that are between 60 and 80 years old. Mao Cha, in case you weren’t aware, refers to the fact that this is essentially loose leaf raw pu-erh, i.e. before it has been pressed into cake form.

Olli, Mr. Guru himself, makes a good point in his notes for this tea when he says that it’s not all that common to find mao cha because being made of large leaves it’s rather bulky and awkward to transport, hence the centuries old tradition of compressing it into cake form.

He also goes on to opine that he personally prefers to brew mao cha as all the leaves are left intact, a statement I can easily agree with. Large, whole leaves tend to make for a longer, more even session in my experience, and it also has to be said that there is something very aesthetically pleasing about the sight of mao cha in a gaiwan.

Olli goes on to note that Gao Shan “…is an area of Yiwu that is enjoyed by tea drinkers for offering a deep, clean Yiwu experience that won’t hit you in the pocket so hard as other areas…“, and that this particular mao cha sports “…classic Yiwu sweetness…”

Post rinse the leaves gave off a classic young sheng aroma, that mixture of dried mushrooms and freshly planed hardwood shavings, but with a slight smokiness, too.

This tea didn’t want to hang about. Right from the first infusion the soup was lip smackingly slick and creamy. The liquor was garden pea sweet, and left a mild, peppery tingling sensation on the inside of my mouth. The residual aroma left in the empty cup was nutty and vegetal with hints of what I can only describe as the inside of a cereal box.

The second infusion brought out a hint of astringency, nothing distracting or overpowering mind. The soup was certainly going down well, and was shaping up to be a real moreish chugger.

I also got a powerful Hui Gan effect from this tea, a lingering sweet vegetal aftertaste that curiously enough seemed to peak around the 7th. steeping.

The qi induced a real laid back, mellow vibe, which manifested itself as an upbeat kind of nostalgia, perfect for a cool but sunny autumnal afternoon. I spent the course of the session trawling through a photo backup drive, reliving good times from the past.

The leaves just steamrollered on until the 10th. infusion, when I noticed a slight drop off, so I upped the steeping times accordingly. After the 16th. round though it was clear that I’d had the best out of the leaves, and so I called a halt to the session at that point.

An interesting tea, this. It kind of fits in somewhere between the type of daily drinker that you swig between loading the dishwasher after lunch and starting the evening meal, and the sort of thing that demands the best teaware and two and a half hours of quietude and studious contemplation.

You ain’t going to rush a session with leaves that can dole out 16 steepings anyhow, so pull out the second string kit, put some jazz on, and browse through your photo collection.

The dishwasher can wait…