Posted on October 7, 2018 by northernteaist

This tea grabbed my attention for several reasons.

Firstly, the raw material comes from the part of the Wu Liang mountain range that lies in Xishuangbanna prefecture. I’d previously sampled one other shou from that area, and thought it would be interesting to compare the two.

Secondly, I’d never heard of the producers, Yunnan Colorful, and thirdly, as silly as it may seem, I really liked the wrapper.

Unsurprisingly enough this was a purchase from my old favourites, House of Tea. 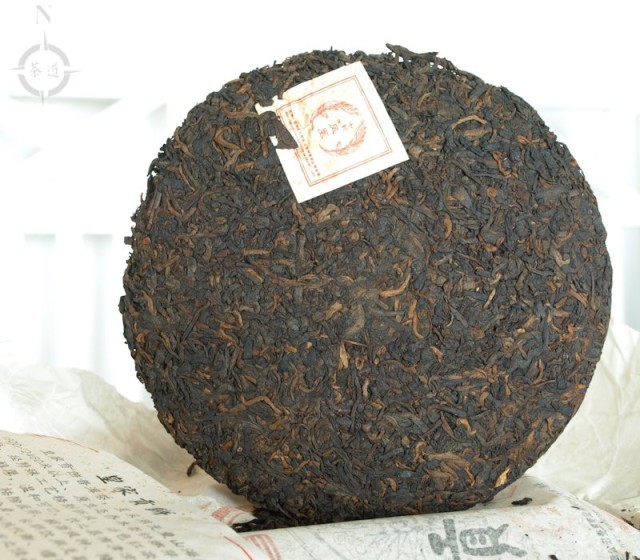 As I hope you can see from all those golden flecks in the pictures, this is quite a tippy tea, and was made from material harvested in 2010 which grew at an altitude of about 2000 metres. The beeng was hand rather than machine pressed, meaning it was not that hard to get in with the tea pick and free off the amount of leaves I wanted for this session.

Spoilers alert – this tea is already well on the way to becoming one of my all-time favourite shous. There, I said it…

Post-rinse the leaves gave off a typically shou aroma of fresh clean paper, but with an incredibly heady, sweet, floral aroma layered on top.

Right out of the gate this tea was dishing out complexity by the bucket load. At the base of it all was a fairly standard clean shou profile, but built on top of that foundation was a subtle cinnamon/cloves spiciness combined with a sweet syrupy sugary candy thing that for all the world reminded me of that 1970s British classic piece of tooth decay weaponry Love Hearts, but with an extra order of vanilla on the side. Hanging above it all, just as Salieri describes Mozart’s oboe note in that film, was that powerful, fragrant flowery thing.

Over the first four infusions the soup gradually thickened up, but although it had a good, full feel in the mouth it didn’t quite seem able to go that extra yard and become a true Orc blood job.

The leaves were starting to run out of steam a little at the 6 steepings point, so to buy myself a little more time I upped the length of each infusion from there on in.

Come the 9th. infusion the intense sweetness had vanished, leaving the floral note all alone, and just one round later the leaves suddenly announced that it was game over.

I was more than happy with my 10 rounds though.

As I said above, it was interesting to compare this tea with the other shou I’d tasted from the Xishuangbanna segment of the Wu Liang range. Both teas boasted heavy flowery aromas, were not overly thickly bodied, were very sweet, and also yielded a slightly above average number of infusions.

That in turn got me thinking about all the variables that could explain all their similarities and even their differences – micro-climates, soil, elevation, how much sun the trees get, processing, storage, etc.

It’s a perfect example of how utterly fascinating the world of tea is. You could spend half a lifetime studying one type of tea from just one geographical location and still hardly scratch the surface.

Repeat daily, for the next 50 years.

I do believe I’ll never tire of doing this…