Biluochun – The Green Snail of Spring

Posted on February 3, 2016 by northernteaist 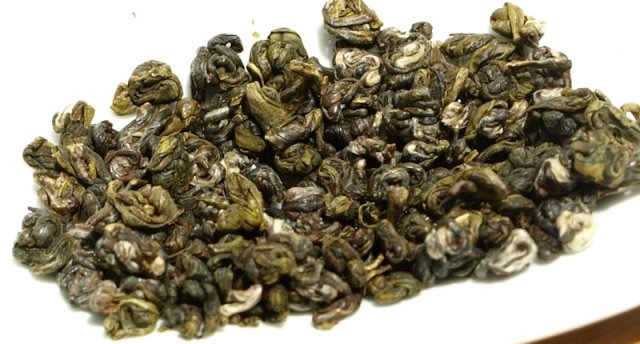 Biluochun is yet another tea that invariably makes an appearance on any variant of the Famous Teas of China list, and as such is a tea well worth getting to know.

The name of this tea translates as “Green Snail Spring”, and refers to the shape of the finished leaf – a tightly rolled spiral, as well as the season of manufacture.

Originally this tea came from Jiangsu province, and was called “Astonishing Fragrance“, until it was renamed by the Kangxi Emperor some time around 1700, during a visit to the region.

The pluck is in early spring, and compromises a bud and single leaf, making it somewhat delicate – even a conservative estimate reckons with 15,000 leaf and bud sets of fresh leaf going into a kilogram of finished tea.

The first thing you notice when you open the packet is the incredible aroma! You would be forgiven for thinking that you had opened a box of Pot-pourri by mistake – your sense of smell is overwhelmed by the scent of dried flowers!

I bought a 100g packet from a local tea shop, the wonderful Ehsan och Pappas Tehus, and paid 39 Swedish Crowns.

I sampled the tea over the course of a day. I steeped it Asian style in the morning just before lunch, and in the afternoon, just as the sky began to fade to grey, I enjoyed a pot or three Western style.

During the pre-lunch tasting I infused the tea in my Samadoyo E-01 teapot. I used 5g of dried leaf for the pot’s 150ml steeping capacity, with the water brought up to 80°C temperature.

The first infusion was extremely delicate, as the tea was beginning to absorb moisture, unfurl, and wake up.

The second steeping was somewhat astringent, with a growing floral aroma to the liquor, as well as a hint of fruitiness, a bit peach-like.

The third infusion was where this tea really hit the sweetspot! The astringency seemed to vanish, and the flowery aroma and fruity taste came rushing out. This was sort of relative, in some way, however.

There was a feeling that although the step up in taste and aroma was noticeable, it was still relative to the teas earlier performance. Although very pleasant, it still felt almost fragile, never in your face or even remotely robust. I’d almost say that it was reminiscent of an early morning fog on a summer’s day, ephemeral and ethereal.

By the fourth infusion the tea was starting to fade noticeably, like an echo of distant thunder.

I decided against further infusions, having obviously seen the tea peak at the third infusion.

I allowed the leaves to cool down, and then examined the wet leaf, always an interesting exercise.

I always enjoy seeing how much rolled tea expands during steeping, the extent to which those tucked up, dried leaves spring back into life after their bath, returning to the original form they had on the bush in that far away tea garden. I just find it a wonderful link to a distant place, as well as the skills of a tea master I’ll sadly never meet. 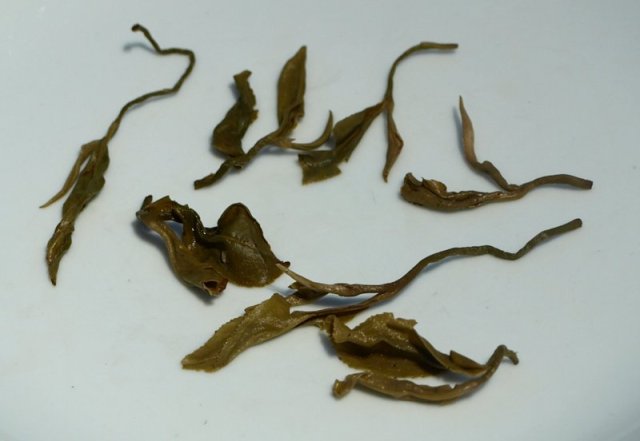 I also enjoy rummaging through the finished tea, and digging out nice examples of the tea maker’s craft, in this case perfect little bud-and-leaf sets.

Here I steeped the tea in a 500ml capacity unglazed clay teapot that I use exclusively for green teas.

Again, the water was heated up to 80°C. I used 2½ teaspoons of dried leaf, placed in a large paper tea filter.

Over the course of a couple of hours I infused the same leaves three times, for 2, 3, and 4 minutes respectively.

The main difference I noted over the course of this session was that the tea never quite hit the heights of its third infusion in the Asian style.

As you might expect, the second infusion was the best of the three, equivalent to a kind of mid-point between the second and third Asian style infusions. 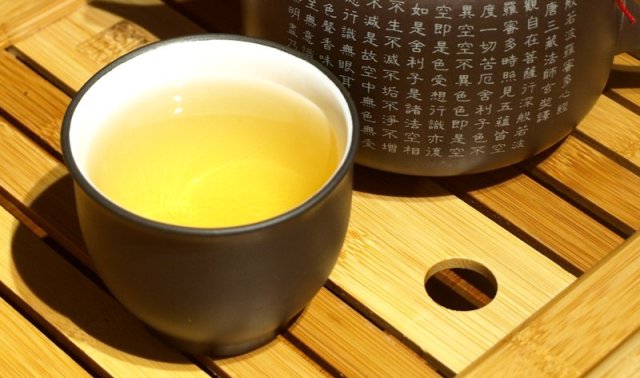 One interesting thing to note – the second and particularly the third Western style infusions brought out a kind of creamy, nutty taste that I hadn’t encountered when steeping the tea Asian style. This, however, might be the clay of the teapot giving something of the flavours it has absorbed over previous infusions with other teas back to this particular one.

Personally, I would go so far as to say that due to its delicate nature I would avoid drinking this tea with food, as its taste and aroma could very easily be swamped by any competing flavours.

A somewhat delicate tea, that needs a bit of TLC to bring out its better qualities, to wit a nice flowery aroma and a pleasantly fruity flavour.

You soon see how this tea earned its spot on the Famous Teas of China list. Definitely a tea worth getting to know.

3 Responses to Biluochun – The Green Snail of Spring