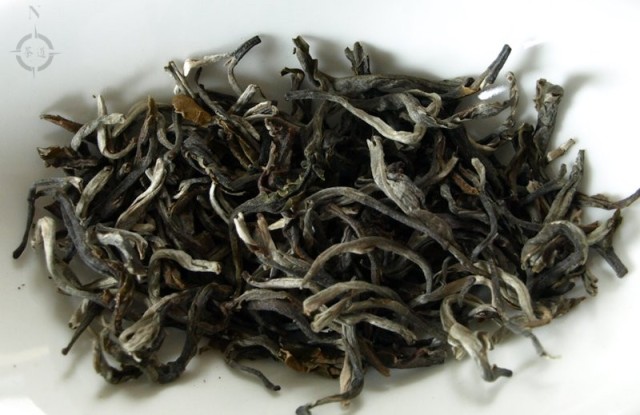 This tea is one half of one of my recent purchases from House of Tea.

I’d really been enjoying the Vietnamese Moc Chau Oolong I bought earlier, so I thought that when it was time to put together my next order I’d sample more of the teas from that part of the world.

I opted for a pair of teas – a black tea that I’ll look at in a future post, and this tea, a green tea.

I was really intrigued by House of Tea’s description of this tea, and one snippet of information in particular. Several times in their notes House of Tea stated that there are similarities between Suoi Giang green teas and sheng Pu-erhs from the other side of the border with the PRC in Yunnan. That prospect proved too interesting to resist, so into the cart it went.

The raw material hails, as its name suggests, from Suoi Giang, which is located in Yen Bai province of Northern Vietnam. The trees are undomesticated, and grow at an altitude of 1400 metres. The leaves are harvested by the Hmong people. An unusual characteristic of Suoi Giang tea trees is their large trunk. The altitude and the mist shrouded environment the leaves have grown in have helped to shape this tea’s unique character.

The first infusion can be summed up in the three word phrase “Wait, what?, whoa!“.

First of all came the more obvious green tea characteristics. Tucked in behind the deliciously oily body there was an almost Long Jing like sweet nuttiness, combined with a subtle vegetal aroma reminiscent of broccoli tops.

I’d been a bit sceptical about similarities between this tea and sheng, but then, all of a sudden, I got it. There was that familiar subtle hint of freshly planed hardwood and dried mushrooms, and a somewhat in-yer-face dense jungle power-punch such as you might get from some shengs such as the 2012 De Hong Ye Sheng I looked at a while ago. I also picked up a kind of young sheng bitterness, but nothing too dominant or overpowering.

I wasn’t quite prepared for what happened next, though – an absolute cricket bat to the back of the head Qi shot. It was almost as though the effect was amplified by its unexpectedness.

Soon I was experiencing a full-on upper body sweat, and the session quickly became a warm, fuzzy, terribly laid back affair.

This was clearly potent stuff, and I decided to pace the session accordingly. Swigging this tea seemed like a bad idea. If any tea could be described as a sipper, this was it.

By the fifth infusion the balance between the green and the sheng aspects had shifted somewhat, with the liquor more of a sheng with some green tea characteristics rather than the other way around. As if to confirm this, I came down with the sheng munchies. I had a feeling that we were entering the back end of the session, though, and decided to ignore the protests coming from my digestive system and press on, safe in the knowledge that once the session came to a close it would be lunch time.

After the 6th. steeping it seemed as though the leaves were done, but playing a hunch I upped the water temperature to initially 85°C and then 100°C respectively, and by doing so I was able to coax a further two rounds out of them. 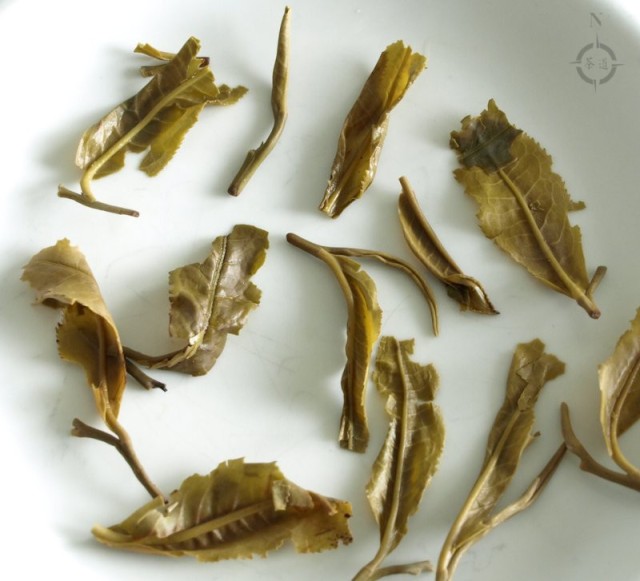 Although 8 rounds doesn’t exactly sound like a long session, I’d experienced that classic sheng-session time dilation effect. What I’d assumed to have been a relatively short session had in fact run out close to two hours.

I have a habit of taking sheng leaves at the end of a gong-fu session and giving them a nice, long steeping in a 400 ml pot, just to extract as much as possible from them. It would be interesting to see how these leaves fare given the same end-of-session treatment.

One thing has intrigued me since my first session with these leaves. In their notes House of Tea mention that pushing this tea a bit harder might bring out even more sheng-like characteristics. This obviously leaves the door open to some future experimentation playing around with primarily water temperature to see what other surprises this tea has locked away.

When I was putting this order together I couldn’t help but notice that a black tea is produced from the same raw material. Another game of “compare and contrast“, this time based around this green tea and that black one was too hard to say no to, so the black simply had to join the green in a package heading thisaway.

Plenty more fun and games on the horizon, then. Good times.