Posted on September 19, 2018 by northernteaist

These mini tuos were part of my recent order at Green Tea Guru.

It’s not uncommon to read about people having bad experiences with mini tuos. They can be a convenient way for a factory to use up any lower quality bits of broken leaf they have laying about, and towards the lower end of the range a fair bit of dust and particulate can find its way into the mix.

A nice mini tuo is a supremely good thing to have in your travelling tea kit, being convenient to carry and easy to use. The problem comes in getting your hands on the good stuff.

Once I had these at home, I started to do a bit of research, and it looks as though they are a Yunnan Sourcing Tea Shop production, which shouldn’t come as a surprise given that Green Tea Guru feature several other YS products in their store.

Neither YS or GTG have ever let me down before, so now I was doubly confident that these tuos were going to do the business.

The raw material originates from, as the name suggests, the Mengku area of Lincang prefecture in Yunnan province, and after undergoing the “Wo Dui” wet piling / fermentation process for 47 days the leaves were sorted into the various grades used in shou production. These tuos are made from Grade 3 material – remember though that the grading of shou reflects the size of the leaf and not necessarily its quality. The Grade 3 used here is what YS describe as “semi-tippy“.

The compression on the tuo was relatively tight, and factoring in their small, potentially fiddly size I was a bit reluctant to charge straight in with the tea pick.

Instead I opted to treat the tuo in a similar manner to how I usually deal with dragon balls – I gave it 2 flash rinses in a gaiwan with boiling water, and then let it steam in the bowl with the lid closed bar a tiny aperture to vent excess steam in order to prevent scalding the leaves. About 5 minutes later the tuo had begun to fall apart nicely, and I could safely get to work with my tea pick. I then transferred the leaves to the 135 ml unglazed clay teapot that I use exclusively for shou, and began the session proper.

I opted to start with a 10 second infusion to combat the last vestiges of the pressing, and get all the leaf open and accessible. I looked into the gong dao bei and thought to myself “..hmmm..that sure doesn’t look like 135 ml of tea…”. Ah.

It wasn’t. I’d left the rinse in, and the first infusion got dumped on top of it. D’oh, etc. Still, the first round out of the leaves had at least looked good during the pour… 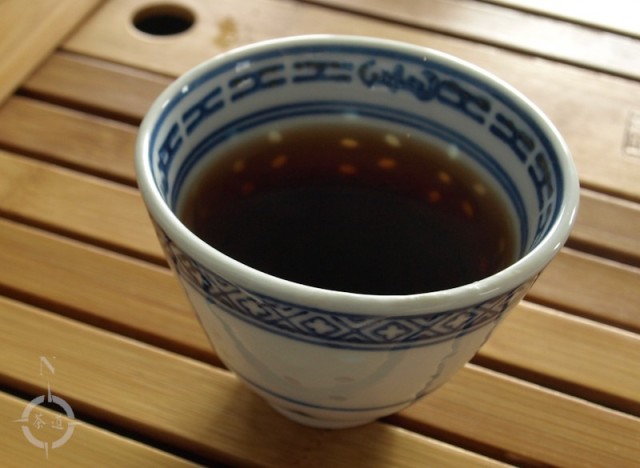 The second steeping was nice, with the expected shou earthiness, but also notes of sweet wood shavings and a subtle hint of camphor.

By the third steeping the soup had deepened in colour, and was showing a very respectable level of oomph body-wise for a tea comprised of fairly fine leaves. I was also impressed by the low level of dust in the strainer, confirmation that we were dealing with a decent quality of tea.

The danger when working with finer leaves, though, is that their greater surface area can result in a shorter session, and by the fifth round I had the distinct feeling that the tea was starting to slip a bit. You can counter this by increasing the duration of future steepings, but sooner or later the inevitable call has to be made, and here it came after the 9th. infusion.

That’s still what I consider to be a good return for a mini tuo such as this, and kind of the cherry on the cake. Nine rounds with a good flavour, satisfying body and little dust or debris? Sounds like a win to me.

To sum up then – there’s nothing earth shatteringly unusual or fantastic going on here, but what there is is a rock solid, honest, and decent tea that most certainly would work well as part of your “daily drinker” sub-stash.

I can certainly see these tuos carving out a regular place in my away-day kit. I reckon that they’ll work like a charm together with my Kamjove pot. Good stuff. Can’t say fairer than that.