Personally, I blame the sea air.

In my experience it makes everything taste at least 20% better, and gives me a raging appetite that would shame a hippo that hadn’t eaten in a fortnight.

When we’re at our little wooden house by the sea we have to keep cooking simple by sheer necessity – we have very little counter space and a small three ring propane burner. The night before the morning in question I’d rustled up a little dish known in our family as “Cowboy Mince“, probably because it was imagined to have been the sort of things cowboys might have eaten. Fry off some chopped onions in butter, add some minced beef and pork, fry until that gets a bit of colour, then chuck in a load of baked beans and black pepper. Simmer until done. Eat with a chunk of nice bread. Might not sound like Michelin starred nosebag, but remember that “20% better” rule…

I overindulged. Significantly. Badly. Three platefuls and far too much bread (sauce mopping up, for the use of). I somehow managed to push my bloated carcass away from the table, and waddle to my bed, where I reclined, making a series of “ooooof” and “uuuurrffle” noises.

During a restless night I endured troubling dreams in which cowboys chased me wielding cooking utensils, threatening to make me eat their horses.

At about 4 am. I was shaken awake by my digestive system, which had decided it was the perfect time for a spot of comedy improvisation with the theme of “Broken Boiler“. If an actual boiler had been making the exact same noises and shuddering as violently the whole surrounding neighbourhood would have been cordoned off and evacuated while the offending device was shut down, dismantled, and transported to the nearest scrap metal merchant. 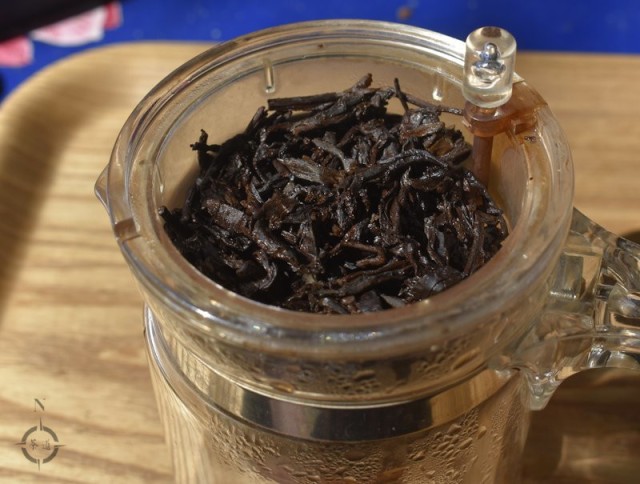 Lying down wasn’t working, so I decided to try a short promenade outdoors. As I walked past the side of the veranda an eagle glided past – silent, awesome, a triumphant manifestation of the power and majesty of the natural world. Just as I was thinking that it was a good job that our comparatively small cat had stayed behind this time, my food processing tubes let out an anguished rumble that was probably audible in the next county. I’d imagine it takes a lot to startle an eagle, but by golly I managed it. We never saw him again for the rest of the holiday…

Tea. Yes, only tea could placate the intestinal beast. Falling back on the “shou pu-erh as digestif tea supreme” principle, I decided to forgo my usual morning pot of Bai Mu Dan and consult my old friend Dr. Haiwan Shou. Trying hard not to wake the others, I got the kettle on, and made ready. The good Doctor prescribed his own recipe, mahogany coloured, sweet-but-earthy “Psychological and Physiological Cure-all“, and even after the first sip of that Yunnanese wonder tonic I knew I was in safe hands.

Six soothing rounds later, calming oil had indeed been poured on exceptionally troubled waters, and after a final heave the alimentary monster was silenced, although dealing with the aftershocks would make for some socially awkward moments when around polite company for the rest of the day.

So, thank you Dr. Shou. You saved me yet again.

Tea. Is there anything it cannot do…?

This entry was posted in tea diary and tagged tea as medicine, tea on holiday. Bookmark the permalink.