Posted on November 25, 2018 by northernteaist 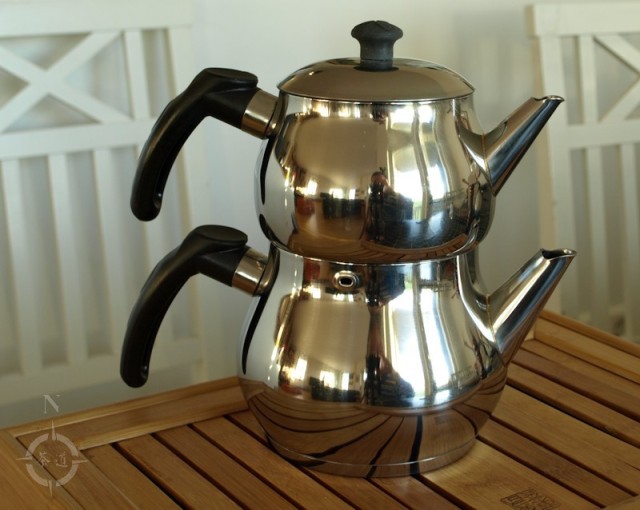 When I was at a local food emporium recently, stocking up on Emona Brand Ceylon tea for Chai Masala, I made a discovery.

Amongst the kitchenware I was delighted to see that they sold Çaydanliks, traditional two-piece Turkish teapots.

For some time now Çaykur Turist Turkish Rize has been Mrs. Teaist’s default early morning tea. I had often thought about preparing it in the traditional manner rather than our more casual, Western style approach, but lacked the right equipment, namely a Çaydanlik.

Suddenly, though, there one was, and at a reasonable price, too. Result.

When you look at tea consumption on a per capita basis, then Turkey is way ahead of, well, everyone, really. Only the Irish come even remotely close. Given that, then it comes as no surprise that Turkish tea culture has produced such a clever tea making device as the Çaydanlik.

There are several advantages to using a Çaydanlik. Firstly, as the water comes to the boil in the lower pot, the upper pot, where you will be brewing the tea, is pre-warmed. Secondly, during the relatively long infusion time the water in the lower pot is kept at a low simmer, which then in turn prevents the tea from cooling down as it steeps upstairs.

After watching quite a few YouTube videos and doing a bit of supplementary reading to fill in the blanks, I felt as though I knew enough to do pot and leaves alike justice, so after a quick wash and rinse for the Çaydanlik, I was under starters orders.

The leaf / water ratio I used is 1 level tablespoon (15ml) per 100ml, which for this particular tea equates to 4 grams.

The technique is relatively simple. Fill up the lower pot with cold water, and place on your cooker top to heat up. This is best done over a medium heat, as it gives the upper pot more time to heat up properly. For a solo session, I measured out 3 tablespoons of tea, as I would be using 300ml of steeping water. The dry leaves are placed in the upper pot, which is then sat on top of the lower pot on the heat. This means that as the water heats up in the lower pot, not only is the upper pot pre-warmed, but the leaves are too. I’ve a hunch that this might also help in terms of flavour development.

The steeping time is 15 minutes. Now, tea-lore and accepted practice might say that this is far too long, but trust me, it’ll be right!

You’ll know when you’ve reached the allotted time if the leaves have sunk to the bottom of the pot.

This is where this method of infusion has another trick up its sleeve. You have at this point brewed a “strong” tea. You now carefully pour this base tea through a tea strainer into traditional tulip shaped Turkish tea glasses.

If you like it strong, you’re good to go with a full glass. If, however, you prefer to take your tea less powerful, you should only partly fill up your glass with the strong tea, and then bring it to your preferred strength by topping up with warm water from the lower pot.

My preference is about 80% strong tea / 20% warm water. The nice thing here is that everyone can finish the tea off to their own personal taste. A touch of sugar if that’s your thing, and Bob’s your uncle. A bit of Baklava on the side comes very highly recommended…

Another advantage of this technique is that it coaxes out the full flavour profile of the tea. It ramps up the nuttiness, as well as drawing out a hint of berries and a floral aftertaste that I had no idea was lurking in those leaves.

While we’re on the subject of leaves, I’d imagine that to get the best out of a Çaydanlik you should stick to genuine Turkish tea. I certainly intend to, namely the aforementioned Çaykur Turist. I’m guessing that the long steeping time used here came about because home produced Turkish teas such as Rize were able to handle it without becoming too bitter. Using any other tea is going to be a true YMMV job, not to mention a SAYOR* one, too.

As the session progresses the pots remain sat on a low heat to keep everything warm, and so the tea in the upper pot is still steeping. This doesn’t result in any kind of bitterness – if anything towards the back end of the session the tea acquires the kind of cheek-pinching astringency a red wine aficionado would recognise.

In conclusion then I’m very pleased with my Çaydanlik, and I can see it getting a great deal of action in the years ahead.

* Steep At Your Own Risk