Posted on March 2, 2016 by northernteaist 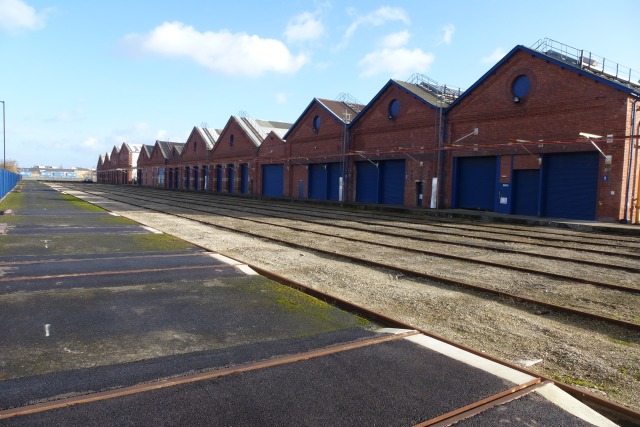 Once upon a day shift, a distressing number of years ago, I worked as a vehicle body builder.

My place of employment was a railway carriage works, a sprawling complex of huge workshops built of Victorian red brick, safely located on the outskirts of a Northern town, comfortably away from all the nice medieval bits in order not to scare tourists of a delicate nature.

It was hard for civilians to grasp the scale of the place. Each cavernous workshop was large enough to accommodate dozens of railway carriages. Gigantic and powerful overhead cranes were capable of hoisting a carriage high up into the air and throwing it around as though it was one of Hornby‘s finest.

Each workshop was its own little universe. There was the Frame Shop, a nightmarish, dark place that would have terrified Dante, where sparks from welding gear and grinders pierced the gloom, and the air was full of the mad music of steel impacting steel.

The Paint Shop was airy, light, clean, and quiet, a refined place where vehicles were made to look pretty before being defiled by the travelling public.

The Repair Shop carried out emergency surgery on the rolling wounded before sending them back out into battle, and the Press Shop’s monstrous 500 ton hydraulic press smashed steel plate into outrageous shapes, and destroyed the foundations of neighbouring properties.

All these diverse environments had one thing in common, however. Every day as it approached 10am, the frenzied activity and the mad cacophony of industry began to fade like daylight approaching a total eclipse. By the stroke of 10 itself the inside of every workshop had fallen as silent as the interior of a great Gothic cathedral. The official tea break had begun.

Battered and chipped mugs, coated with the accumulated tea stains of hundreds of tea breaks past, were simultaneously pulled out of several thousand lockers and drawers. Tea bags were dropped into these distressed receptacles, and their owners queued up to draw a shot of boiling water out of an urn the size of a phone booth.

When the brew had reached the required strength, the tea bag was fished out, and casually flicked aside. The astringency of the tea was more often than not tempered with a teaspoon or two of powdered milk, which was thrashed around in the dark liquid until all or as many as possible of the lumps had dissolved. Regular dairy produce would have quickly decayed into something yoghurt like and potentially dangerous with the average workshop’s surface-of-Mercury like operating temperatures.

The resulting beverage was radioactively hot, and had to be approached with as much due care and attention, not to mention fear and respect, as one would lavish on a nuclear reactor breach, or an escaped angry bull.

This was a convenient time to re-stock one’s energy supplies, the preferred method being the ingestion of copious amounts of fat, carbohydrates, and sugar. Illicit, underground shops operated out of cunningly disguised workbench drawers, and sold chocolate and various deep fried potato products. Brave souls queued at the official works snack shop, for hurriedly fried bacon and sausages unceremoniously thrust into flabby, pale bread baps and passed off as sandwiches.

Just as an eclipse comes to an end after a short period of totality, after 10 minutes or so foremen would do their rounds, commanding the tea swilling hordes back to work.

The last bites of those artery clogging snacks would then be washed down with the final few mouthfuls of tea. The resulting layer of milk powder residue that had formed at the bottom of the mug would then be swilled out. The de-crudded cup would then be placed back into storage, the encrusted tea stain now a layer thicker, growing daily like a calcium deposit on a stalactite.

Then, one day, quite suddenly drinks machines mysteriously appeared, as enigmatic and terrifying as the Monoliths in Kubrick’s sci-fi masterpiece. The 10 O’clock tea break was about to take on a whole new dimension…